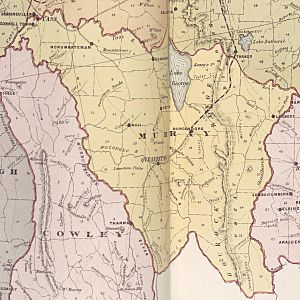 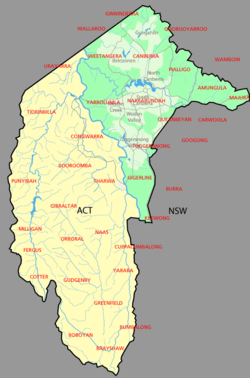 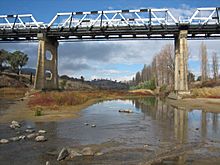 Looking south near the Tharwa Bridge; the Murrumbidgee River formed the boundary between Murray, on the left and Cowley on the right. This land is now part of the Australian Capital Territory and not in any county. 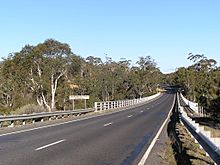 Bridge over the Shoalhaven River, near Braidwood; the river is the boundary between Murray and St Vincent. 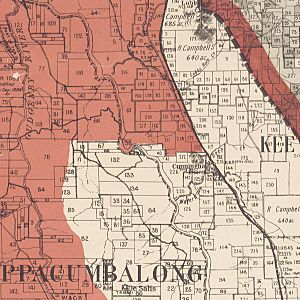 Murray County was one of the original Nineteen Counties in New South Wales and is now one of the 141 Lands administrative divisions of New South Wales. It included the area which is now part of Canberra and as far north as Lake George and Yass. It was originally bounded on the west by the Murrumbidgee River, on the east by the Shoalhaven River and on the north by the Yass River. A large area of the county was transferred to the Commonwealth government in 1909 in the Seat of Government Acceptance Act to make part of the Australian Capital Territory, along with land in Cowley County. Since then, the ACT border is now part of the western boundary. Part of the ACT border is determined by property boundaries in the Parish of Keewong, in the County of Murray; specifically the southern end of portions 177, 218, 211, 36, and 38. This is mentioned in the Seat of Government Acceptance Act of 1909.

The four parishes of Canberra, Yarrolumla, Narrabundah and Gigerline became part of the Australian Capital Territory in 1911. Some of the other parishes are smaller than they were in the nineteenth century, due to land being taken out of them for the ACT; this includes Tuggeranong, Queanbeyan, Amungula, Pialligo, Goorooyarroo, Ginninderra and Weetangera.

Alterations to parishes on the ACT/NSW border, listed clockwise from the north-west:

A full list of parishes found within this county (including the four former parishes of Canberra, Yarrolumla, Narrabundah and Gigerline which are now wholly in the ACT ); their current LGA and mapping coordinates to the approximate centre of each location is as follows:

All content from Kiddle encyclopedia articles (including the article images and facts) can be freely used under Attribution-ShareAlike license, unless stated otherwise. Cite this article:
Murray County, New South Wales Facts for Kids. Kiddle Encyclopedia.