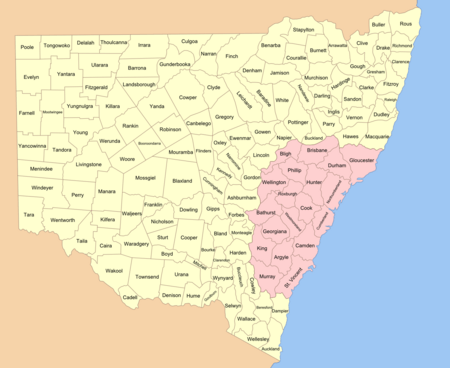 The 141 counties of New South Wales, with the original Nineteen shown in pink 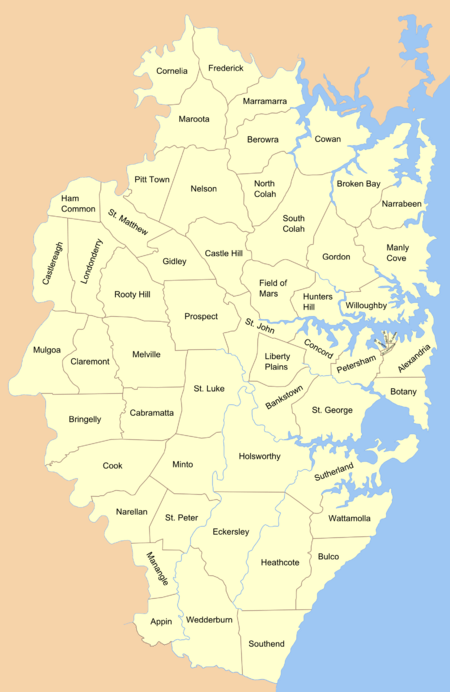 The parishes of Cumberland County

The counties were further subdivided into 7,419 parishes. There are also three land divisions, approximately one hundred land districts, and several other types of districts as well as land boards used at various periods. There were also thirteen hundreds proclaimed in Cumberland County, which were later abolished. These divisions are part of the lands administrative divisions of Australia. Unlike the local government areas of New South Wales, which have gone through restructuring periods by the government, the counties have been the same since the nineteenth century. 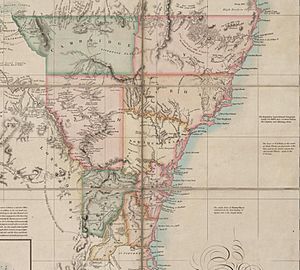 The first county proclaimed was Cumberland on 6 June 1788. Northumberland was named in 1804. Several other counties were established around Sydney; by the 1820s there were nine counties (see 1828 and 1832 maps). They were: Roxburgh, Northumberland, Durham, Westmoreland, Cumberland, Argyle, Camden, Ayr and Cambridge. They were in the approximate area of the present day cadastral units except that some of them were larger and took up land which was in 1834 assigned to other counties. Ayr and Cambridge were not used in the 1834 counties, taking up area which is approximately in what became Macquarie County and Brisbane County.

Instructions were given to Governor Brisbane in 1825 to survey New South Wales and divide it into counties of various sizes, hundreds, and parishes between 15 and 25 square miles (40 and 65 km²). The Nineteen Counties were surveyed by Thomas Mitchell in 1834. Thirteen hundreds were proclaimed in Cumberland county, but not in anywhere else in New South Wales, and these were repealed in 1888.

As the counties are based on area, rather than population, there are huge differences in the populations of the coastal counties with those for the remote west. The whole of Sydney with several million people is located within Cumberland County, while there are many counties for areas in the Far West which have a very low population.

The counties have little official function and are only now used for land titles and geographic surveying, and as an area of coverage within some industrial awards. Yancowinna County is also legally the only part of the state in the South Australian timezone.

Genealogy records from the nineteenth and early twentieth centuries for New South Wales commonly use the town name followed by the county. The 1911 Britannica lists all towns in New South Wales the same way, such as Albury, Goulburn county, Broken Hill, Yancowinna county and Wagga Wagga, Wynyard county. 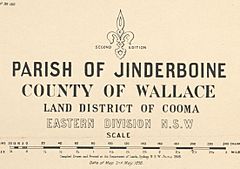 The key from a typical cadastral map from the 1890s showed four types of subdivisions; the parish, county, land district and land division. This one is located in the County of Wallace

All content from Kiddle encyclopedia articles (including the article images and facts) can be freely used under Attribution-ShareAlike license, unless stated otherwise. Cite this article:
Lands administrative divisions of New South Wales Facts for Kids. Kiddle Encyclopedia.