Mittagong is colloquially known as Mitta. 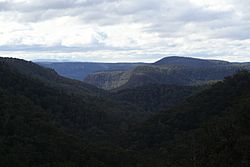 Popular among locals and visitors is a small man made lake, Lake Alexandra, that feeds into the nearby Nattai River. Lookouts are available at all three reserves for viewing. Lookouts on Mount Gibraltar include Bowral Lookout, Mittagong Lookout and Mount Jellore Lookout. Lookouts on Mount Alexandra include Katoomba Lookout and Box Vale Track Lookout. Gibbergunyah Reserve include the Gib Lookout and Ninety Acre Hill Lookout.

Mount Gibraltar can also be seen up close when travelling to Bowral from Mittagong along Bowral Road.

The name "Mittagong" is said to come from an Aboriginal word meaning "little mountain". Other suggested meanings are "a companion" and "plenty of native dogs", as the Mittagong range was home to many dingos at one time.

Today, the town offers visitors the chance to explore its history, scenery, small waterfalls, bushwalks and its famed "Waratah" flowering in November. A chamber music festival is held each Easter. Tourists can visit Mount Gibraltar, Lake Alexandra and various wineries located around and in Mittagong. It also features one of the first iron mining sites in Australia, close to Lake Alexandra. The main street boasts a wide array of retailers and many antique shops.

Notably, Mittagong is close to many of the Southern Highland's wineries and cellar doors. The wineries have established themselves in the region since the 1980s due to the soil and climate of Mittagong which is believed to be perfect for viticulture.

Mittagong is home to an abandoned historical building complex known as the "Maltings". In the past, The Maltings served as malthouses for the old major beer company of New South Wales, Tooth and Co. One of the malthouse buildings can be seen when entering Mittagong on the Old Hume Highway from Braemar. This building is one of the original buildings and is over 100 years old. This complex is abandoned and in decay. However, a few years ago it had been subject to an attempted renovation which was stopped shortly after.

One of two major buildings that make up the Maltings

Mittagong is on the Old Hume Highway, which linked Sydney, Canberra and Melbourne, but the highway was diverted in 1992. The opening of the bypass was expected by someto negatively affect business in towns bypassed like Mittagong, but instead the location has become a rest stop for drivers and a daytripper destination from Sydney, only around one hour away. Moreover, Mittagong can be accessed from the Hume Highway in the north via the Aylmerton/Braemar ramp and in the south via the Welby ramp.

Mittagong railway station is served by the Southern Highlands Line with regular services to and from Sydney and Moss Vale, with some services extending Goulburn. Long distance services to Canberra and Melbourne also stop at the station.

A number of long distance coach operators service Mittagong for Canberra, Melbourne and Adelaide. Priors Scenic Express operates a service six days a week to Greater Sydney (Campelltown, Liverpool and Parramatta) and to the Shoalhaven and South Coast of New South Wales. 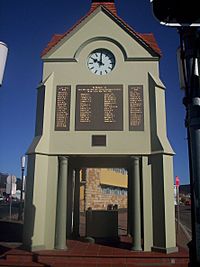 World War I memorial in Mittagong

The first European permanent settler in the Mittagong district was William Chalker (1775–1823) (also known as Charker), a former convict transported from England, who arrived in the area on 10 May 1821. He became the Principal Overseer of Government Stock, Chief Constable and Poundkeeper in the Cowpastures. A memorial plaque to Chalker was unveiled in May 1988 as a Bicentennial project; the plaque overlooks an area once known as Chalker's Flat now known as Lower Mittagong. It is widely known that some of his descendants still live in the Mittagong/Bowral area.

A later name for Mittagong/Mettagong was New Sheffield (which name was adopted by Ebenezer Vickery, Simon Zollner and other directors of the Fitz Roy Iron Works at a meeting on 26 August 1864) and the lower portion of Mittagong toward Welby was named Nattai.

Mittagong has been home to many industries, with iron being first smelted in the area. The Mittagong Coal Mining Company (Box Vale Colliery), Joadja Kerosene Shale, and the first supply of fresh milk and butter to Sydney by the Fresh Food & Ice Company all operated out of Mittagong in years gone by.

The transport of iron ore and smelted iron was made by steam train. Lake Alexandra was originally a water supply dam for railway engines hauling coal from the back of Mount Alexandra to the iron mines. It was drained in the 1890s when the land around it was given to Council by the Mittagong Land Company.

The presence of the ironstone was discovered when the deviation of the southbound road was being made through Mittagong in the early 1830s. Fifteen years elapsed before any attempt was made to work the iron deposit. In 1848 land was taken up and smelting commenced at the Fitzroy Iron Works in a small blast furnace that had been erected. The Sydney Morning Herald of 12 December 1848 said the public had already witnessed the success of the mine by the specimens of manufactured articles exhibited in Sydney. On 2 February 1849 it was stated that a quarry had been opened and stone prepared for buildings in course of erection. A brickfield had also commenced operations. Smelting was being carried on by means of a Cataline furnace and two shafts had been sunk. The party engaged in operating the mine was living in tents until buildings were erected. The mine was referred to at this time as the Fitz Roy iron mine, doubtless in honour of Sir Charles A. Fitz Roy, the Governor-General.

Until the 1990s the town was dominated by trucks and in winter it was also busy with skiers' traffic on the way to the Australian Alps. Today the Hume Highway bypasses Mittagong and all the towns and villages of the Southern Highlands.The highway bypass was first evaluated as having a slightly negative impact on Mittagong's economy for about a year after its opening, due to the loss of traffic-serving business. Expectations were re-evaluated as mildly positive in 1994 taking into account hard-to-quantify benefits such as the increased appeal of the town as a place to live.

Mittagong is also home to prestigious private boarding girls high school, Frensham School, which was opened by Winifred Mary West in 1913. The school is notable for its alumni which include Dr Catherine Hamlin and former Lord Mayor of Sydney, Lucy Turnbull.

The Mittagong Farm Homes for Boys, Mittagong TSB (training school boys), later known as Renwick was situated along Bong Bong Road. Two homes were also along the Old Sydney Road near the airport. An apology was issued by the NSW Government in 2013 for the cruel practices suffered by many of the children who spent time in this institution. The institutions alumni are now in the process of having one of the homes donated by the government as a museum and dedicated building to remind of the injustices perpetrated against children.

In March 2007, the Highlands Marketplace was opened. The complex is located on the Old Hume Highway towards Welby. The building has retail franchises such as Big W, Woolworths and many others. It is built upon the original iron works site dating back to the 1800s. There is a display of some of the original remains of this historical site in the carpark, interpretive signs recording the history. In November 2008, a new shopping complex was opened alongside the Highlands Marketplace known as the Highlands Hub. It has franchises such as OfficeWorks and Best & Less.

All content from Kiddle encyclopedia articles (including the article images and facts) can be freely used under Attribution-ShareAlike license, unless stated otherwise. Cite this article:
Mittagong Facts for Kids. Kiddle Encyclopedia.