Yerrinbool is a Northern Village of the Southern Highlands of New South Wales, Australia, in the Wingecarribee Shire, and is accessible from the Hume Highway (via Bargo or Alpine) and is about 12 km drive from nearby Mittagong. It is 6–8 km to Hill Top as the crow flies, accessible by foot via a fire trail. It was previously officially known as the Town of Yerrinbool. It is located on the historic Old Hume Highway. At the 2006 census, Yerrinbool had a population of 1,088.

The Yerrinbool General Store, across the road from the station, closed in 2014. Community facilities include a community hall, fire station, an Anzac memorial, sporting field and skate park. Located on the northern outskirts of the town, is the Tennessee Orchard, the main crop being apples, and where local fresh produce can be purchased in season.

It contains a Bahá'í School which is a retreat for practitioners of the Bahá'í religion. It is known as the Yerrinbool Baha'i Centre of Learning. See Bahá'í Faith in Australia.

Yerrinbool can also be distinguished by the Tennessee Orchard Sign which has a large round red apple on it. The bright sign can be seen when travelling past the village on the Hume Highway.

The name Yerrinbool is an Aboriginal word for the Wood Duck — a species which is quite common around the ponds in Yerrinbool. The area where Yerrinbool is prior to settlement was known as "Little Forest".

On 13 July 1919, Yerrinbool railway station along with now closed Aylmerton Station was officially open for use on the Main South Line. It was built on the new train line that was built between Mittagong and Picton to replace what is known today as the disused Picton Loop Railway Line. This line was built to ease steep grades as the original line left Picton Station train traffic "bottlenecked".

With the line and station now operating, the village was laid out, with two early land sales of Yerrinbool Station Estate on 6 October 1919 and 1 January 1920.

Yerrinbool Post Office opened on 1 December 1919 on the arrival of the railway and closed in 1977. The Yerrinbool General Store was built and opened in 1921 along with a saw-mill which has now been demolished. On 20 August 1922, a school was opened with 30 students enrolled. However, the school building was burnt down in a fire in the 1970s and not rebuilt. The community hall was built in March 1938 by local voluntary labour.

The Yerrinbool Baha'i School was first opened in May 1937 as a Baha'i Summer School.

According to census in 1954, Yerrinbool had 50 dwellings with a population of 150. 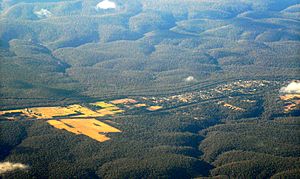 All content from Kiddle encyclopedia articles (including the article images and facts) can be freely used under Attribution-ShareAlike license, unless stated otherwise. Cite this article:
Yerrinbool, New South Wales Facts for Kids. Kiddle Encyclopedia.