Bargo is a small town of the Macarthur Region, New South Wales, Australia in the Wollondilly Shire. It is approximately 100 km south west of Sydney.

It is situated between the township of Tahmoor (north) and the village of Yanderra (south), and accessible via the Hume Highway that links Sydney, Canberra and Melbourne. It was previously known as West Bargo and Cobargo. 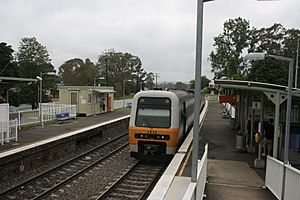 Bargo railway station was first opened on 19 July 1919 as West Bargo and then renamed in 1921 as Bargo.. The station is part of the Main South Line and is served by NSW TrainLink's Southern Highlands Line. The original Bargo railway station building on the eastern side of the platform was destroyed by arson. Currently in use is a permanent demountable building. 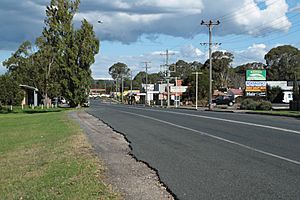 The name Bargo may be derived from the local Aboriginal language name Barago, meaning cripple, thick scrub, or brushwood.

The earliest reference to Barago was noted as by George Caley in a letter to Sir Joseph Banks on 25 September 1807. The aborigines called the Bargo area Narregarang, meaning that the soil was not firm - a shaky place. Early explorers and convicts found getting through the Bargo area a difficult experience due to the thick scrub, explorers dubbing the tricky bush the Bargo Brush. In early Colonial times, 'Bargo Brush' became notorious among travelers for harboring 'bolters', convicts who had escaped from captivity and become bushrangers.

Bayley quotes William Riley, who passed through Bargo Brush on horseback in 1830:

"... a miserable, barren scrub, thickly wooded for eight miles; there having been so much rain lately this abominable part of the road was a continuation of bogs for eight miles." Soon the Brush, with its thickets for hideouts, became the lurking place for robbers and caused travel to become fraught with peril. The Sydney Gazette of 17 March 1832 reported the road as ". . . one uninterrupted morass"!

Bargo is noted as being where the first recorded sightings of the lyrebird, koala and wombat took place by European settlers. Bargo is also the site of an infamous massacre in 1816, when settlers forced local Aborigines to walk off a big cliff and shot them if they refused. Bargo Police Station, now abandoned, is currently used as a doctors' surgery. The lock-ups remain behind the building. The patrol area of the Bargo Police Station included Pheasants Nest, Bargo, parts of Tahmoor and Yanderra. 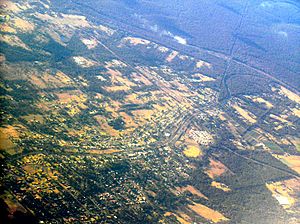 Natural attractions like the Avon and Nepean Dams are a popular attraction for family picnics and for viewing local and Illawarra water catchments and bushland.

Bargo is home to animal reserves like the Wirrimbirra Sanctuary, established by Thistle Harris in the 1960s, which offers bushland walks on well-maintained walking tracks, flora and fauna awareness programs, a small cafe, and a walk-in animal pen featuring wallabies.

Mermaid Pools and the Potholes

Mermaid Pools and the Potholes are located on the Wollondilly River and are open to the public for swimming.

Historically, Mermaid Pools was a local sacred aboriginal site for women. It is believed to be protected by spirits. In addition, the Potholes which is located near Mermaid Pools have been a local communal gathering point for summer swimming since early European Settlers and continues to be an attraction for local residents.

Bargo is home to the Yerrinbool-Bargo Bushrangers football team. The team was established by a group of men in the Pub one night, the Bushrangers now have teams from Under 6 to All Age Men & Women competing in the Highlands Competition. Notably, the Yerrinbool-Bargo coalition soccer team is one of the only local soccer teams where two places of different regions and councils form a coalition; Yerrinbool is of the Southern Highlands and Wingecarribee Shire whilst Bargo is part of the Wollondilly Shire and Macarthur Region.

Bargo Rural Fire Brigade was established 1939. From its humble beginnings, the brigade's few handtools and drum of water have been constantly upgraded to its present-day Pumper, Heavy Tanker and Light Tankers, housed in the purpose-built Village Two category building on the outskirts of the township. The brigade's services include fighting structure fires and bush fires in the local area and attending vehicle accidents on the Hume Highway where passes through Wilton, Pheasants Nest and Yanderra. Bargo Fire Brigade assists with out-of-area disasters, for example, the 1994 Sydney Bushfires, the Sydney Hail Storm of 1999, the bushfires of the Christmas period 2001/2002, and 2007 Gosford storm damage.

The Brigade celebrated its 70th year of operation on 26 December 2009.

"The whole road was a nightmare with its succession of bogs where bullock waggons sank to their axles. Drivers cut saplings to corduroy sections of the road and threw stones into bogholes. Teams on unbogged waggons were attached to teams on bogged vehicles to help pull them free; sometimes only to see them sink again! A waggon could take a couple of days from Bargo River to Mittagong, camping the night anywhere around Yerrinbool, then called Little Forest, before the steep climb of Catherine Hill which would then be attacked with fresh bullocks in the morning... The Sydney Morning Herald of 2 June 1865 reported that it had not been uncommon to see all the types of vehicles 'stuck fast or rather half buried in the numerous sloughs ... filled with mud .'

A verse of the Australian folk song Stringybark and Greenhide (circa 1865) celebrates the bad reputation among bullock drivers of the Bargo roads:

"If you travel on the road, and chance to stick in Bargo,
To avoid a bad capsize, you must unload your cargo;
For to pull a dray about, I do not see the force on,
Take a bit of greenhide, and hook another horse on."

All content from Kiddle encyclopedia articles (including the article images and facts) can be freely used under Attribution-ShareAlike license, unless stated otherwise. Cite this article:
Bargo, New South Wales Facts for Kids. Kiddle Encyclopedia.