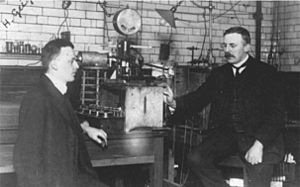 Johannes Wilhelm "Hans" Geiger (30 September 1882 – 24 September 1945) was a German physicist. He is perhaps best known as the co-inventor of the detector component of the Geiger counter and for the Geiger–Marsden experiment which discovered the atomic nucleus. Geiger was born at Neustadt an der Haardt, Germany. He was one of five children born to the Indologist Wilhelm Ludwig Geiger, who was professor at the University of Erlangen.

In 1902, Geiger started studying physics and mathematics at the University of Erlangen and was awarded a doctorate in 1906. In 1907 he began work with Ernest Rutherford at the University of Manchester and in 1909, along with Ernest Marsden, conducted the famous Geiger–Marsden experiment called the "gold foil experiment". Rutherford and Geiger created the Rutherford-Geiger tube, later to become the Geiger tube.

In 1911 Geiger and John Mitchell Nuttall discovered the Geiger–Nuttall law (or rule) and performed experiments that led to Rutherford's atomic model. In 1928 Geiger and his student Walther Müller created an improved version of the Geiger tube, the Geiger–Müller tube. Geiger also worked with James Chadwick. In 1912 he became leader of the Physical-Technical Reichsanstalt in Berlin, 1925 professor in Kiel, 1929 in Tübingen, and from 1936 in Berlin.

He was a member of the Uranium Club. Geiger never expressed himself in public about the Nazis. There are reports both about him helping, and rejecting, Jewish colleagues. Geiger died in Potsdam, Germany a few months after World War II ended in Europe. He had four siblings: three sisters and one brother that were all younger than him. His brother, Rudolf Geiger, was very interested in meteorology and climatology.

All content from Kiddle encyclopedia articles (including the article images and facts) can be freely used under Attribution-ShareAlike license, unless stated otherwise. Cite this article:
Hans Geiger Facts for Kids. Kiddle Encyclopedia.