Battle of Berlin facts for kids

The Battle of Berlin was the last major battle of Second World War in Europe. The Battle took place in Berlin from 16 April to 3 May 1945. During the battle the Red Army, along with Polish forces, captured the city of Berlin, Germany. When they captured the Reichstag, Adolf Hitler killed himself with his new wife by shooting himself and her taking a poison pill.

On 12 January 1945 the Soviet and Polish forces began attacking Berlin. In the end of that attack, their forces stood on the Oder River, 60 kilometres east of Berlin. In 1945 the Wehrmacht had few good fighters or good weapons compared to 1944.

Despite his advisors' opinion, Hitler decided to stay in the city. He heard about the death of Franklin D. Roosevelt on the radio and he hoped the city would be saved.

The Battle of Seelow Heights

The battle on the city began in the Seelow Heights. The Seelow Heights are 17 kilometers west of the Oder and 45 kilometres east of Berlin. They were well defended by the Wehrmacht. On 16 April, the Red Army and Polish Army attacked Seelow Heights. Almost 1,000,000 attackers with 20,000 artillery pieces were fighting against 100,000 Germans with 1,200 tanks. Despite this, the German defenders managed to hold the heights for four days.

On 20 April, Hitler's birthday, the allies began to bombard the centre of the city with rockets and artillery. They did not stop until the city surrendered. On 22 April, Hitler, when he knew the Germans plans had failed, cried in anger. He knew the war was as good as lost. One of his generals, Alfred Jodl, thought it would be possible to form a linkup between the army in Berlin, and the 12th Army commanded by Walther Wenck that were fighting the U.S. Army. Hitler agreed to this idea, but those troops could not get to the city.

Hitler remained in his Führerbunker until his death. He knew that escape was nearly impossible. His soldiers knew that too, and wanted to get out. Since there was no hope of winning, Hitler gave orders to his generals and allowed a breakout plan on April 28th. However, this plan went badly. Only a few of the expected number of soldiers managed to get through Soviet lines. On April 29th Hitler authorized another try to break out May 1st.

However, on April 30th the Red Army captured the Reichstag. They were just 500 yards from the Führerbunker. Hitler and several other leaders killed themselves. On May 1st, Helmuth Weidling ordered a break out. One division, named the Nordland Division, escaped and were caught outside Berlin.

In the next few days, the various armies of Nazi Germany surrendered.

Interesting Facts about the Battle of Britain 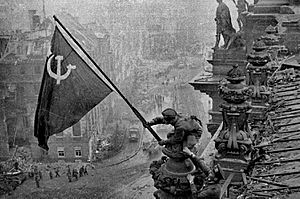 Raising a Flag over the Reichstag, a photograph taken during the Battle of Berlin on 2 May 1945

All content from Kiddle encyclopedia articles (including the article images and facts) can be freely used under Attribution-ShareAlike license, unless stated otherwise. Cite this article:
Battle of Berlin Facts for Kids. Kiddle Encyclopedia.