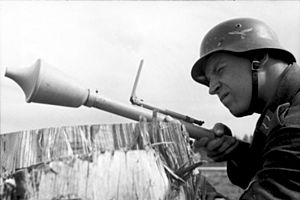 A Luftwaffe soldier aims his Panzerfaust

A Panzerfaust is a recoilless rifle that was invented by Germany. A Panzerfaust can only be used once unlike the Bazooka. The Panzerfaust was used heavily late in World War II, especially during the Battle of Berlin. They were made in very large numbers. They were less powerful than later Rocket-propelled grenades.

All content from Kiddle encyclopedia articles (including the article images and facts) can be freely used under Attribution-ShareAlike license, unless stated otherwise. Cite this article:
Panzerfaust Facts for Kids. Kiddle Encyclopedia.