Kids Encyclopedia Facts
Not to be confused with Rancho Rio de los Americanos.

Rio Rancho (Spanish: Río Rancho) is the largest and only city in Sandoval County, part of the expansive Albuquerque metropolitan area, in the U.S. state of New Mexico. A small portion of the city extends into northern Bernalillo County.

It is the third-largest city in New Mexico, and one of the most rapidly growing. As of the 2010 census, Rio Rancho had a population of 87,521. The name Rio Rancho derives from Los Ranchos, the Spanish colonial ranches established along the Rio Grande in the Albuquerque Basin, and throughout historic Nuevo México. There were large ranches also in neighboring Corrales. Since the late 20th century, it has developed as a suburb of Albuquerque. 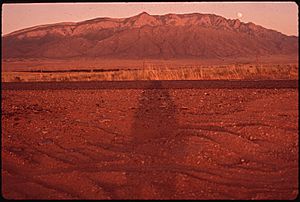 The Rio Rancho area was originally part of the Alameda Grant, which was founded by the Spanish in 1710. By the early 20th century, much of the land grant had been sold to land investment companies. Amrep Corporation purchased 55,000 acres (22,000 ha) in 1961 and turned the land into a housing development called "Rio Rancho Estates", with the first families moving in the early 1960s. Most of these early residents were New Yorkers, as the developers advertised heavily in New York media. The population grew ten-fold between 1970 and 1980, and the City of Rio Rancho was incorporated in 1981. The opening of a large Intel Corporation plant in 1981 had a major economic impact on the city.

Since the 1990s, Rio Rancho has taken steps to become more independent from neighboring Albuquerque, including the establishment of separate school and library systems and attempts to attract businesses to the area. The city's latest project is the Downtown City Centre development that includes a new city hall building, a new University of New Mexico West and Central New Mexico Community College campus, as well as the Santa Ana Star Center. The arena opened in October 2006. City Hall opened in September 2007. 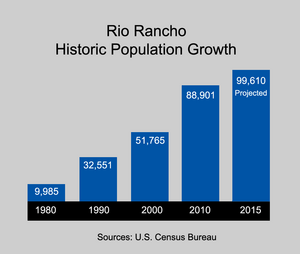 Rio Rancho is bordered by Albuquerque to the south, the Santa Ana Indian Reservation to the north, and Bernalillo and Corrales to the east.

Rio Rancho is in an arid climate.

The Rio Metro Regional Transportation District operates Rio Transit, a door-to-door paratransit service for senior citizens 55 years of age and older, and disabled adults 18 years of age and older, for residents of Rio Rancho. The service is operated out of the Meadowlark Senior Center, and provides service Monday-Friday from 7:30 am to 3:00 pm. Riders must register with the service prior to using it. Rio Metro RTD also operates a commuter bus route serving the Enchanted Hills neighborhood in Rio Rancho. This service connects residents of Enchanted Hills to the US 550 New Mexico Rail Runner station and provides service during the morning and evening commutes. Rio Metro Bus connections are available at the US 550 Rail Runner station for Zia Pueblo, San Ysidro, Canon, and Jemez Springs. A Rio Metro commuter bus route provides service to and from the Cuba NM area, with a Park and Ride designated at Home Depot, which is located near the corner of NM 528, NM 550. Rio Metro's website and schedules may be viewed at: www.riometro.org 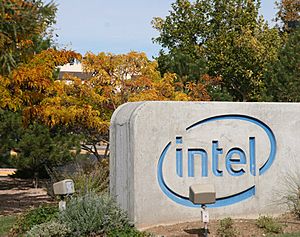 The Intel Corporation is by far the largest employer in Rio Rancho. The services, retail, and government sectors are also major components of the local economy.

Rio Rancho is the site of Intel's Intel Fab 11X, one of the largest semiconductor fabrication plants in the world. The fully automated, $2 billion facility opened in 2002 and was the first Intel plant to manufacture 300 mm silicon wafers, which can hold almost twice as many chips as the standard 200 mm wafers. Fab 7, Intel's original Rio Rancho plant, closed in 2002, but is being converted into a test facility.

In 2005, Rio Rancho became the first U.S. city to offer citywide voice-over-WiFi (VoWiFi) service. Many residents complained that the service did not live up to their expectations.

Several call centers are located in Rio Rancho. Walmart opened in early summer of 2006 in Rio Rancho, and was a catalyst for related commercial retailers to locate nearby.

An Albuquerque-based incubator and co-working space "FatPipe" opened a satellite office in Rio Rancho. It is intended to spur business innovation and startups within the city. 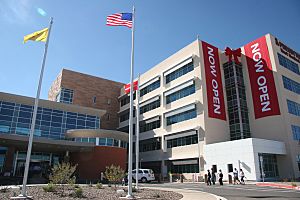 New construction of large facilities include:

In 2010 the City Council passed an automatic annual increase in water rate, equivalent to 25% over a five-year period.

The city constructed A Park Above, a structure in the south of the city for youth recreation.

The University of New Mexico has a satellite campus in Rio Rancho devoted to health sciences.

Central New Mexico Community College also has one of its eight campuses in Rio Rancho's downtown area, within walking distance of the UNM campus. 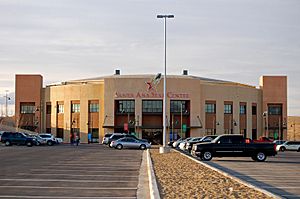 Rio Rancho was home to the New Mexico Scorpions minor-league ice hockey team, which relocated from Albuquerque in 2006, until the team ceased operations in 2009. The Scorpions played at Santa Ana Star Center.

In the spring of 2008, the Star Center became the home of the New Mexico Wildcats indoor football team. They lasted two seasons, folding at the conclusion of 2009.

Since February 2012, Rio Rancho has been the location of the New Mexico Stars, a professional indoor football team. They play home games at the Santa Ana Star Center, with whom they signed a five-year contract.

All content from Kiddle encyclopedia articles (including the article images and facts) can be freely used under Attribution-ShareAlike license, unless stated otherwise. Cite this article:
Rio Rancho, New Mexico Facts for Kids. Kiddle Encyclopedia.