Kids Encyclopedia Facts
This page is about the lava dome near Mount Shasta in California. For other uses, see Black Butte. 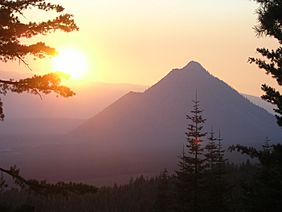 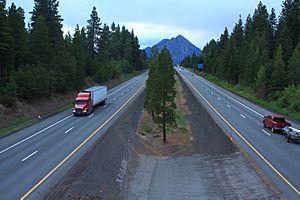 Black Butte is a cluster of overlapping dacite lava domes in a butte, a satellite cone of Mount Shasta. It is located directly adjacent to Interstate 5 at milepost 742 between the city of Mount Shasta and Weed, California. The highway crosses a 3,912 ft (1,192 m) pass, Black Butte Summit, at the western base of the lava domes. The lava domes were extruded at the foot of the cone of Shastina following the period of its major eruptions about 9,000–10,000 years ago.

A United States Forest Service fire lookout tower was built on the summit in the early 1930s, but destroyed during the Columbus Day Storm of 1962. A new lookout was built in 1963 and operated until 1973. The building was moved by helicopter to a new location in 1975 and only the concrete foundation remains today. A 2.5-mile-long (4.0 km) trail leads to the summit from a trailhead accessible by gravel roads off the Everitt Memorial Highway. The summit boasts an outstanding view of the southwest side of Shasta and Shastina, and on clear days Mount McLoughlin is easily visible 70 miles (113 km) to the north in Oregon.

All content from Kiddle encyclopedia articles (including the article images and facts) can be freely used under Attribution-ShareAlike license, unless stated otherwise. Cite this article:
Black Butte (Siskiyou County, California) Facts for Kids. Kiddle Encyclopedia.