Weed is a city in Siskiyou County, California, United States. As of the 2020 Census, the city had a total population of 2,862, down from 2,967 in 2010. There are several unincorporated communities adjacent to, or just outside, Weed proper, including Edgewood, Carrick, and Lake Shastina. These communities generally have mailing addresses that use Weed or its ZIP code. Weed is about 10 miles (16 km) west-northwest of Mount Shasta, a prominent northern California landmark, and the second-tallest volcano in the Cascade Range.

Weed's city motto is "Weed like to welcome you". Weed has frequently been noted on lists of unusual place names.

The town of Weed gets its name from the founder of the local lumber mill and pioneer Abner Weed, who discovered that the area's strong winds were helpful in drying lumber. In 1897, Abner Weed bought the Siskiyou Lumber and Mercantile Mill and 280 acres (1.1 km2) of land in what is now the City of Weed, for the sum of $400. By the 1940s Weed boasted the world's largest sawmill.

On September 15, 2014, a fast moving wildfire called the "Boles Fire" spread through the town with massive force fueled by 40-mph winds. The fire started behind the Boles Creek Apartments in the central part of Weed at approximately 1:30pm and within 4 hours quickly spread to over 200 acres. Evacuations were immediately ordered and a shelter was first set up at College of the Siskiyous, but as fire headed towards the college, the evacuation center was relocated to the Siskiyou Golden Fairgrounds in Yreka, then Yreka and Mount Shasta High Schools, then the Armory in Mt. Shasta.

Over 200 structures were damaged or destroyed, including two churches, the elementary school, high school, and Roseburg mill, many homes, and businesses. The schools and mill only sustained minimal damage to outbuildings. About 7,678 Pacific Power customers in both Weed and Mt. Shasta lost power as a result of the fire.

The town of Weed gets its only source of public water from the Beaughan Spring. The pristine water is piped directly to homes.

In September 2016, the New York Times reported French billionaire Pierre Papillaud is demanding that Weed give up its Beaughan Spring spring water source so that Papillaud's bottle water company could have more water to sell. Disconnecting from Beaughan Spring would leave Weed without public water.

According to the United States Census Bureau,, of which 0.10% of is covered by water. The closest cities to Weed, with a population greater than 50,000, are: Redding, California (69 miles south); and Medford, Oregon (91 miles north).

Weed has a warm-summer Mediterranean climate (Csb according to the Köppen climate classification system), with cool, wet winters and warm, dry summers. Its average annual precipitation is 23.64 in (600 mm). Its USDA hardiness zone is 7b.

Weed is at the intersection of Interstate 5 and U.S. Route 97. Interstate 5 is the primary north–south transportation corridor for the west coast of the United States running from the Mexico–US border to the Canada–US border. U.S. Route 97 is a major north-south U.S. highway continuing from Weed in a northeasterly direction toward Klamath Falls, Oregon, thence through Oregon and Washington to the Canada–US border. California State Route 265 also runs through the City of Weed, locally known as North Weed Boulevard. Only two blocks long, it is the second-shortest state highway in California. 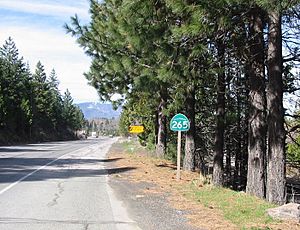 The closest airports for commercial air travel are Rogue Valley International-Medford Airport and Redding Municipal Airport. The Weed Airport serves general aviation and as a base of operations for search and rescue operations on Mount Shasta. Corporate visitors or geological researchers typically use this facility.

Amtrak trains pass through Weed, but do not stop there. The Amtrak bus/shuttle has one stop in South Weed. The nearest depot for Amtrak train travel is in Dunsmuir, approximately 15 miles (24 km) to the south.

Greyhound Bus Lines has a bus station, with both north and southbound buses making stops.

Visitors use Weed as a base to engage in trout fishing in the nearby Klamath, Sacramento and McCloud Rivers, or come to see and climb Mount Shasta, Castle Crags or the Trinity Alps. Visitors also engage in nearby skiing (both alpine and cross-country) and biking, or hike to the waterfalls, streams and lakes in the area, including nearby Mossbrae Falls, Lake Siskiyou, Castle Lake and Shasta Lake.

One of Weed's main streets

Education: seven percent of Weed residents age 25 and older have a bachelor's or advanced college degree.

Weed's historic lumber industry and manufacturing facilities made it a magnet for ethnic minority migration, that may not have otherwise been the case in this region of the country. A large number of Italian immigrants migrated to Weed, and other towns in southern Siskiyou County at the turn of the 20th century. While immigrants were a source of labor for the region, they were not always well treated, in fact in 1909 complaints from workers in the lumber industry reached the Italian consul. However, in time the Italian population came to be a cornerstone of Weed civic life. Many streets in the early Italian neighborhood bear names of Italian cities, such as Rome, Genoa, Como, and Venice. Annually since 1954, Weed has held the Weed Italian Carnevale in June or July, although recently dropping "Italian" from its name while maintaining the Italian spelling of carnival and the traditional bocce ball tournaments.

A large number of black-Americans migrated to Weed as well, to work in Long-Bell Lumber Company's Weed facility after the company closed two mills in Louisiana in 1922. The company promised to advance travel expenses and provide housing for workers relocating to Weed. Immigrants locating in Weed since the 1980s have come primarily from Mexico and Laos. As a result of these migrations, Weed has a much more ethnically diverse population than Siskiyou County as a whole. Netting the Hispanic or Latino population out of Census figures for white race, Weed's white population is 60.6 percent compared to Siskiyou County at 79.5 percent using the same metric.

Weed is mentioned in John Steinbeck's novel Of Mice and Men (first published 1937) as being the town from which George Milton and Lennie Small are fleeing at the beginning of the book.

In the WWDC 2014 Keynote, Apple Inc. engineering executive Craig Federighi displayed a map of locations in California that Apple could name its OS X desktop after, and Weed was joked as a location.

From its founding in 1901, to as late as the 1980s, Weed was home to a thriving lumber industry. Roseburg Forest Products (plywood), International Paper Company, Morgan Products Ltd. (wooden door manufacturing), and J.H. Baxter (wood treatment) were all based in Weed. The historic industrial area at the northeast corner of Weed has been plagued with environmental concerns and clean-up efforts as a result of chemicals used for wood treatment, as well as chemical residue from glue used in the door factory. 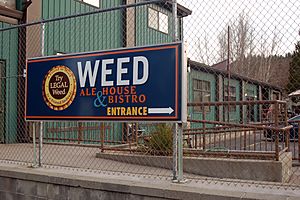 Although historically reliant on logging, wood processing and forest-related products, Weed's economy has become more reliant on tourism as a source of economic activity. Weed's microbrewery, Mt. Shasta Brewing Company, relies on tourists for 92 percent of its business, according to co-owner Vaune Dillman.

Today, most of the wood-product-related industry has been scaled back or ceased altogether, and new retail and light industrial activity is concentrated in the southeast corner of Weed. Retail at the south end of Weed, in the form of restaurants and hotels, caters primarily to tourist travel on the Interstate 5 corridor. Light manufacturing of bottled water from Crystal Geyser Water Company has also added economic stability to the area.

Weed is part of the Shasta Valley Enterprise Zone which provides tax breaks, fee reductions, and permit fast-tracking for employers locating in the area.

As of 2007, the largest employers in Weed were:

As a small community with few retail outlets, taxable sales within the city are somewhat limited, totaling $89 million in 2012.

In the November 2014 General Election, the voters of Weed passed Measure J which raised the city's sales and use tax rate by 0.25 percent. 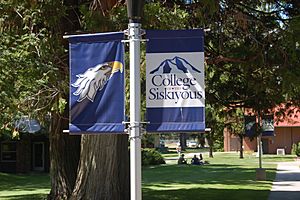 College of the Siskiyous, Weed, California 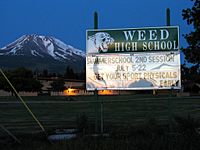 Secondary-level students are educated at Weed High School, (Grades 9-12) part of the Siskiyou Union High School District. Weed High School is known for its picturesque campus and diverse student body. The College of the Siskiyous, located in Weed, provides a steady source of employment for faculty and staff, a source of visitors for the local economy, and offers a two-year junior college education with various associate degree and vocational certificate programs.

All content from Kiddle encyclopedia articles (including the article images and facts) can be freely used under Attribution-ShareAlike license, unless stated otherwise. Cite this article:
Weed, California Facts for Kids. Kiddle Encyclopedia.