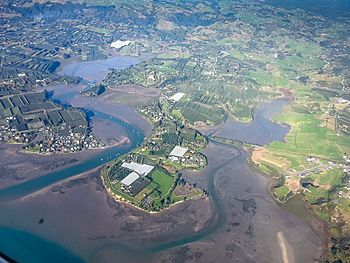 The Bay of Plenty (Māori: Te Moana-a-Toi), often abbreviated to BOP, is a region in the North Island of New Zealand situated around the body of water of the same name. The bay was named by James Cook after he noticed the abundant food supplies at several Māori villages there, in stark contrast to the earlier observations he had made in Poverty Bay.

Significant horticultural, forestry and tourism industries are well established in the region. However, the Bay of Plenty is the third-most economically deprived region in New Zealand, with the eastern districts being among the least economically developed in the country. However, in 2011 Business & Economic Research Limited (BERL) identified the Bay of Plenty as one of the top performing regions in economic development, ranking second behind Auckland. It had the highest employment and GDP growth for 2011 and had the fastest growing medium term GDP. Tauranga, the region's largest commercial centre, was named New Zealand's top city for economic performance for the 2011 year.

The first recorded European contact came when James Cook sailed through the Bay of Plenty in 1769. Cook noted the abundance of food supplies, in comparison to Poverty Bay further back along the eastern coast of the North Island. Further reports of European contact are scarce prior to the arrival of missionary Samuel Marsden to the Tauranga area in 1820. During the 1820s and 1830s, northern iwi including Ngā Puhi invaded the Bay of Plenty during their campaign throughout the North Island, fighting local Māori tribes in what became known as the Musket Wars. However, the 1830s and 1840s saw increased contact between Bay of Plenty Māori and Europeans through trade, although few Europeans settled in the region. Missionary activity in the region also increased during this time. In 1853, New Zealand was subdivided into provinces, with the Bay of Plenty incorporated into Auckland Province.

Conflict returned to the Bay of Plenty during the 1860s with the New Zealand Land Wars. Initial conflicts in the region stemmed from Tauranga iwi supporting the Waikato iwi in their conflict with the government. In retaliation, British Crown and government-allied Māori forces attacked the Tauranga iwi, including at the famous Battle of Gate Pā in 1864. Further conflict with the government arose in 1865 when German missionary Carl Völkner and interpreter James Fulloon were killed by local Māori at Opotiki and Whakatane, respectively. The ensuing conflict resulted in the confiscation of considerable land from several Bay of Plenty iwi by the government.

Confiscation of Māori land deprived local iwi of economic resources (among other things), and also provided land for expanding European settlement. The government established fortified positions, including at Tauranga, Whakatane and Opotiki. European settlers arrived throughout the latter half of the 19th century, establishing settlements in Katikati, Te Puke and the Rangitaiki area. In 1876, settlements were incorporated into counties following the nationwide dissolution of the provincial system. Initial settlements in the region struggled: the climate was ill-suited to sheep farming and the geography was inaccessible, further hindered by a lack of infrastructure. By the end of the century the population had started to dwindle. But after experimenting with different crops, settlers found success with dairy production. Dairy factories sprang up across the Bay of Plenty in the 1900s, with butter and cheese feeding economic prosperity throughout the early 20th century; local Māori continued to live on the fringe of this prosperity. Timber also became a major export in the 1950s, as kiwifruit did later.

The present Bay of Plenty region was formed in 1989 after a nationwide review and shakeup of top-level local government in New Zealand. The new region incorporated the former counties of Tauranga, Rotorua, Whakatane and Opotiki. 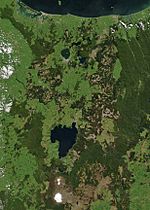 Satellite photo of the Bay of Plenty (top half of image)

The Bay of Plenty region covers 12,200 km² of land and 9,500 km² of coastal marine area. It extends along the eastern coast of the North Island, from the base of the Coromandel Peninsula in the west to Cape Runaway in the east. The region extends 12 nautical miles from the mainland coastline, and also extends from the coastlines of several islands in the bay, notably Mayor Island/Tuhua, Motiti Island, Whale Island and the active volcano of Whakaari/White Island. It extends inland to the sparsely populated forest lands around Rotorua and Murupara.

The geographical bay is defined by 259 km of open coastline used for economic, recreational and cultural purposes. The coastline from Waihi Beach in the west to Opape is defined as sandy coast, while the coast from Opape to Cape Runaway is rocky shore. Sizeable harbours are located at Tauranga, Whakatane and Ohiwa. Major estuaries include Maketu, Little Waihi, Whakatane, Waiotahi and Waioeka/Otara. Eight major rivers empty into the bay from inland catchments, including the Wairoa, Kaituna, Tarawera, Rangitaiki, Whakatane, Waioeka, Motu and Raukokore rivers. The region has more than 200 km² of lakes, known as the Lakes of Rotorua.

Much of the central part of the region lies within the Taupo Volcanic Zone, which extends from the centre of the North Island northwards to Whakaari/White Island. Volcanic mountains and lakes, geothermal areas and geological fault lines all dot the landscape. The geothermal region around Rotorua is a major tourist site, while many hot springs in the region are used as swimming areas. The geothermal field near Kawerau is the site of a geothermal power plant that will reportedly meet up to one third of residential and industrial electricity demand in the Eastern Bay of Plenty. Whakaari/White Island, the site of a former sulfur-mining operation, is an active volcanic island popular with tourists. The eruption of Mount Tarawera in 1886 and the 1987 Edgecumbe earthquake were two disasters related to geological activity in the volcanic plateau.

Prominent mountains in the region include Mount Maunganui, Mount Tarawera and Mount Edgecumbe/Putauaki, which also have cultural significance to local Māori. The Kaimai and Mamaku mountain ranges lie at the western border of the region. Swamp land was formerly concentrated around a number of rivers, but much of this was dredged in the early part of the 20th century to increase land for settlement and other uses. Large native and foreign (planted) forest areas are found in the inland parts of the region. The Kaingaroa Forest is the world's largest planted forest, comprising radiata pine mainly used for timber. 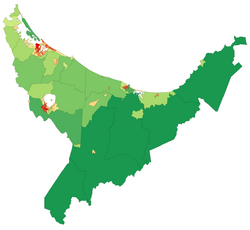 Population density map of the Bay of Plenty at the 2006 Census. Red = High, Green = Low.

The Bay of Plenty has 227 km of rail network and 4,460 km of roads. The main rail line in the region is the East Coast Main Trunk Railway, which extends from Hamilton in the Waikato region to Kawerau via Tauranga, with the Murupara Branch Railway extending the Kawerau terminus to Murupara, and the Mount Maunganui Branch connecting the Mount Maunganui terminus with the East Coast Main Trunk. Rail networks in the region are used exclusively for freight. The hub of regional economic activity is the Port of Tauranga, with well-established rail and road connections to other parts of the region. Three commercial airports also operate in the Bay of Plenty: Tauranga Airport, Rotorua Airport and Whakatane Airport.

Car travel remains the dominant form of transport in the region. In 2002, the number of vehicles owned in the region was 189,000, with an average of 1.51 vehicles per household. Significant public transport bus services exist only in Tauranga and Rotorua. Significant growth in the Western Bay of Plenty District has seen increased strain on road infrastructure, particularly with increasing traffic congestion in Tauranga. Due to this growth, a new highway network is being planned and constructed in Tauranga to join with its current network spanning on the western side of the city. Transit New Zealand, in conjunction with Environment Bay of Plenty and the Tauranga City and Western Bay of Plenty District Councils, is planning to build an Eastern Motorway bypassing Te Puke, a Western Motorway bypassing Omokoroa and a smaller Southern Motorway.

All content from Kiddle encyclopedia articles (including the article images and facts) can be freely used under Attribution-ShareAlike license, unless stated otherwise. Cite this article:
Bay of Plenty Region Facts for Kids. Kiddle Encyclopedia.