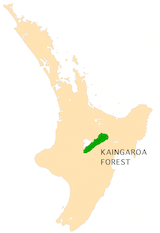 Location of the Kaingaroa Forest

Kaingaroa Forest covers 2900 km² of the Bay of Plenty region of New Zealand, and is the largest forest plantation in New Zealand, and the second largest in the Southern Hemisphere (after the 6000km² Sabie/Graskop plantation in South Africa). The forest stretches from Lake Taupo in the south to Kawerau to the north. The headquarters of the forest are at the small settlement of Kaingaroa, Bay of Plenty, 50 kilometres southeast of Rotorua. Prior to planting the area was a tussock and scrub plateau (ranging between 500 ft (150 m) and 2,481 ft (756 m) high), formed on volcanic ash.

The New Zealand Ministry for Culture and Heritage gives a translation of "long area of land" for Kāingaroa.

The forest was first planted in the late 1920s and owned as a state asset by the New Zealand government. Experimental planting of douglas fir and radiata pine began on a 5 acres (2.0 ha) block at Kaingaroa in 1901 and continued from 1906 using Waiotapu prison labour. By 1932 the pines averaged 128 ft (39 m) high and 2.1 ft (0.64 m) in diameter. Later planting was as an unemployment relief scheme. While under government control it was known as the Kaingaroa State Forest.

In the 1980s the government sought to sell the forests to private interests. Several Māori iwi went to Court to prevent the sale, arguing that they were the traditional owners of the land, that the land had been wrongfully taken from them, and that the government should retain the land until a settlement of the claims had been reached. It has taken 20 years to reach settlement of those claims and to see the forest lands returned to their traditional owners. On 1 July 2009, it passed to a group of tribes that were the traditional land owners in partial settlement of their claims that the Crown breached the Treaty of Waitangi. The forests themselves (the trees) continue to be owned by a private company (Kaingaroa Timberlands Ltd), which holds a forestry licence over the land.

All content from Kiddle encyclopedia articles (including the article images and facts) can be freely used under Attribution-ShareAlike license, unless stated otherwise. Cite this article:
Kaingaroa Forest Facts for Kids. Kiddle Encyclopedia.