Kawerau is a town in the Bay of Plenty region of the North Island of New Zealand. It is situated 100 km south-east of Tauranga and 58 km east of Rotorua. It is the seat of the Kawerau District Council, and the only town in Kawerau District.

Kawerau is a small community, with an economy that is largely driven by the nearby pulp and paper mill that is run by Norske Skog and Carter Holt Harvey. It is located along State Highway 34, southwest of Onepu, and is the terminus of the East Coast Main Trunk Railway, and the commencing point of the Murupara Branch railway.

Kawerau was one of the worst-affected towns in the 1987 Edgecumbe earthquake.

Kawerau is one of the youngest towns in New Zealand. It was founded in 1953 as a mill town for the new Tasman pulp and paper mill. The site for the mill was chosen because of the ready availability of geothermal energy, water from the Tarawera River and the large supply of pine timber from the nearby Kaingaroa forest. Unlike most other towns of its size, Kawerau was carefully planned before construction. The town was built with an impressive number of facilities, to accommodate a multinational specialist workforce. The mill continues to drive the local economy and greatly influences the fortunes of the town. The town's population peaked in the early 1980s (8718 in the 1981 census) but has declined significantly since then due to the restructuring of the mill and associated industries.

In 2012 mill owner Norske Skog said it would be shutting one of the two newsprint machines at the mill. In January 2013 it was confirmed nearly half the mill's jobs would be lost. Norse Skog of Norway which is the world's second biggest producer of newsprint confirmed closure of one of its two paper machines at the Tasman Mill at Kawerau with the loss of 110 jobs. The company first announced its intention to shut one machine last September, following a review of its newsprint capacity in Australasia. The remaining Tasman machine would continue to produce newsprint predominantly for the New Zealand and Australian markets. Norske Skog management would work closely with employees, unions and other stakeholders on the detailed closure arrangements, including a mill-wide restructuring programme. Peter McCartey, General Manager of Tasman Mill said it was widely understood the decision had been brought about by global market forces within the industry. The second paper machine had operated successfully for over 50 years. Norske Skog has the widest geographical spread of all the paper producers, with mills in 11 countries on all continents except Africa. Kawerau is also home to geothermal power supply Kawerau Power Station for the local industry as well as the rest of New Zealand.

The total population of the Kawerau District was 6,363 at the time of the 2013 census, a decrease of 8.1%, or 561 people, since the 2006 Census. The population ranks 64th, out of 67 districts total, based on population size. In the census 51.8% of residents said they belong in the European ethnic group, while 61.8% said they belong to the Maori ethnic group. In contrast 14.9% of people in the whole of New Zealand responded as being Maori, meaning that Kawerau has a significantly higher Maori population than New Zealand as a whole. 4.2% of residents responded as being Pacific, and 2.4% responded as being Asian. Percentages do not total 100% as the Census allows an individual to be part of multiple ethnic groups.

The 820 m volcanic cone of Mount Edgecumbe/Putauaki lies 3 km to the east of Kawerau, and is easily visible from the town. The Tarawera River straddles Kawerau to the east and continues north to the Bay of Plenty. Water is supplied to the town from two natural springs. Kawerau's water was judged the best-tasting in New Zealand in 2003 and 2004.

Kawerau has access to vast geothermal resources. There are a number of geothermal hot springs in the surrounding bush owned and operated by local families. The Kawerau geothermal field provides steam power for the paper mill, and a 90 MW geothermal power station is currently under construction.

The District has a land area of 21.9357 km² (8.4694 sq mi), making it the smallest territorial authority in New Zealand in terms of land area. It is completely surrounded by the Whakatane District.

Rainfall is spread throughout the year, though it is not uncommon to experience a drought during summer. 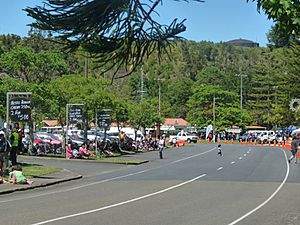 Plunket Street in the town centre during the 2009 Christmas Parade.

Kawerau hosts a number of events each year, including the National Woodskills Festival, 'King of the Mountain' race and the Tarawera 100 motorcycle endurance race. Kawerau is also growing as an event venue for white water rapid competitions such as kayaking and rafting. Kawerau was a venue for the 2013 World Rafting Championships.

The National Woodskills Festival is a competition that encompasses a broad spectrum of wood craftsmanship and wood art. Some of the competitors are professionals but many are amateurs. The Woodskills Festival was first held in Kawerau in 1989 as a local competition. By 1991, the event had become such a popular annual competition that it was developed into a national event, attracting exhibitors from throughout New Zealand. The competition has now developed into a broader range of attractions which captivates many skills from the Forestry Industry and now takes over the town for the weekend, in what is known as Kawerau Woodfest.

The annual Kawerau Woodfest attracts hundreds of visitors from around the country making it the town's largest event and as a result is the highest economic beneficial event in Kawerau. As well as the Woodskills Festival there is an Arts & Crafts Festival with displays open on Saturday and Sunday at various venues around Kawerau.

All content from Kiddle encyclopedia articles (including the article images and facts) can be freely used under Attribution-ShareAlike license, unless stated otherwise. Cite this article:
Kawerau Facts for Kids. Kiddle Encyclopedia.