Te Puke is a town located 28 kilometres southeast of Tauranga in the Western Bay of Plenty of New Zealand. It is particularly famous for the cultivation of kiwifruit. Te Puke has a population of 7496 as of the 2013 Census.

Te Puke is in close proximity to Tauranga, Mount Maunganui, Papamoa, and Maketu, which are all coastal towns/cities, as well as the small townships of Waitangi, Manoeka, Pongakawa and Paengaroa.

The town's name means The Hill, and should be pronounced "teh-pook-eh", not the occasional "Te-Pyook". This name is reflective of its location, as it is on a hill near the Papamoa Hills.

The Tauranga Eastern Link, completed in 2015, moved State Highway 2 away from Te Puke and removed large volumes of traffic from its streets.

Around 1350, the Te Arawa canoe is said to have landed at Maketu after sailing from Hawaiki. The canoe was under the command of chief Tama-te-kapua, and he was responsible for many of the original place names of the area. Māori ventured up the rivers and streams and built many pā in the area.

Lieutenant, later Captain James Cook, the first known European to visit the area, sailed between Motiti Island and the coast in 1769. This was his first voyage to New Zealand, but he did not land here. Cook named the area the Bay of Plenty as he observed that it was well populated and looked very fertile. In 1830 Danish sailor Philip Tapsell, also known as Hans Homman Felk, settled at Maketu and operated as a trader. Church Missionary Society (CMS) missionaries arrived shortly afterwards and established mission stations at Te Papa (Tauranga) and at Rotorua. After the land wars began to ease in the 1860s, European settlers began to move to the Bay of Plenty though not in great numbers.

Maketu, however was a thriving village with a school, post office, and hotel and in 1869 an Anglican church. In 1876, surveying of the Te Puke Block commenced but it was not until 1879 that they survey was completed as the Native Land Court needed to complete their investigation of Māori titles for the land. Demand for land in the Tauranga area increased and the Tauranga Working Men’s Land Association was formed in 1877. Forty eight members petitioned the government for 4000 acres (16 ha) of the Te Puke block under the deferred-payment system. At the same time George Vesey Stewart applied to the government to bring settlers from Great Britain to the Te Puke Block as he had already successfully done in Katikati.

In July 1880, work commenced on the Tauranga to Te Puke Road, via Welcome Bay. It was constructed by the Armed Constabulary and local Māori who worked on their land. Before this, access to Te Puke was made across the Papamoa Hills from Ngapeke to Manoeka, following an ancient Māori trail. Peter Grant had been contracted by the Tauranga County Council to form this track into a bridle path in 1879.

Stores, and also passengers for the town could also come from Tauranga by boat, first to Maketu, then up the Kaituna River to Canaan Landing and then by Māori canoe up the Waiari Stream to the site of the present road bridge just to the south of the town.

By late 1881, Te Puke boasted 25 wooden buildings including two hotels, two general stores, a butcher, a post office and a smithy. The settlers quickly settled upon the land and by 1884 had established a butter factory. Draining of the swamps began and the area was found to be very suitable for crops, and maize and wheat were grown extensively. Later much of the farming land was found to be "bush sick" but was cured with the use of cobalt in the 1930s.

Flax milling had begun in the 1870s and became a major industry in the area until the early 1940s. Saw milling began in 1905 and is still a major industry in the area. In 1883 gold-bearing ore was discovered on the Papamoa Hills and during the 1920s a gold mine operated at Muir’s farm on No 4 Road. With the building of the railway a large Public Works quarry operated in Te Puke and was a major employer. The freezing works at Rangiuru opened in 1968 and HortResearch opened on No 1 Road in 1971.

Disaster was to strike in the early hours of the 10 June 1886 with the eruption of Mount Tarawera. Te Puke residents were awoken with the noise and the many related earthquakes. Many had a good view of the eruption and paintings survive of their memories. Ash and mud showered over crops and pastures up to 12 inches deep in places. The sun was not seen until 1pm.

Stock faced starvation and many farmers were forced to let their animals free to fend for themselves. Some stock was shipped from the area but many died. The settlers became short of food and water themselves and help was gratefully received from Tauranga. Evidence of the Tarawera eruption can still be found in disturbed ground in the area today. (Te Puke was again covered in ash during the 1995 Mount Ruapehu eruption though not to the same scale.)

Te Puke town-ship began to grow and a mission/town hall was built in 1883. This was used for town meetings and as a church by three of the congregations. The first school, (Te Puke Primary) was opened in 1883. The Te Puke Times was first printed in 1912. The fire brigade and town boards were both formed in 1913.

The East Coast Main Trunk Railway passes through Te Puke and opened in 1928. Rail passenger services were provided by the Taneatua Express which operated between Auckland and Taneatua between 1928 and 1959. In February 1959, the steam hauled express train service was replaced by a railcar service operated by 88 seaters that only ran as far as Te Puke. The railcar service operated between 1959 and 1967, when it was cancelled due to both mechanical problems with the railcars and poor patronage, the latter largely due to the circuitous and time consuming rail route between Auckland and the Bay of Plenty at that time.

A combination of the climate and soils in the area has always made Te Puke a popular area for horticulture. From the 1880s tobacco was grown commercially but petered out in the late 1930s. Trial plantings of hops, and later rice, were also tried. Viticulture was also tried and found to be successful but for various reasons also died out. The settlers had established home orchards when finance permitted and it was found that pip and citrus fruits flourished. From this, the first commercial orchard in Te Puke was planted in 1915. Commercial plantings were of apples, pears, oranges, lemons and grapefruit. After World War Two, the Rehabilitation Department settled returned servicemen on the No 3 Road as orchardists. Followed by others with their own finance, most of No 3 Road was in orchards by 1960. By 1966, 80 owners owned about 1500 acres (6 km²) of land of which 900 acres (3.6 km2) was in citrus and balance in sub-tropical fruit including tamarillos (tree tomatoes) and feijoas. In 1934 Jim MacLoughlin had bought a 7-acre (28,000 m2) lemon and passionfruit orchard in No 3 Road. His neighbour Vic Bayliss had two Chinese gooseberry plants and he had sold the fruit for £5! Spurred on by this Jim planted ½ acre of Chinese gooseberries in 1937. During World War II, American serviceman in New Zealand were introduced to the Chinese gooseberry and enjoyed it so much that this spurred further plantings. In 1952 the first exports were made, and in 1959 the name “Kiwifruit” was introduced. Since then many more plantings have been made with Hayward (green) being the most popular. In 1998 “Zespri Gold” kiwifruit was introduced to the market and experiments are being carried out on new varieties including a peelable kiwifruit and "kiwiberry", a small bite-sized kiwifruit-like fruit.

Te Puke has quite a number of attractions. 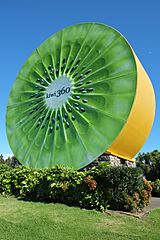 Perhaps the most notable attraction in Te Puke is Kiwi 360, with its famous landmark, the giant kiwifruit clearly visible from the highway just west of the township of Te Puke.

This fully operational kiwifruit orchard offers tours on their KiwiKart, kiwifruit-shaped open carriages pulled by a tractor. The informational tours includes commentary about the processes used to harvest and export the kiwifruit, with stops along the way to have a closer look at the kiwifruit plantations.

Kiwi 360 was openend in 1987 under the name 'Kiwifruit Country'. The visitor centre complex at Kiwi 360 also houses a café, large souvenir shop selling many kiwifruit-based products, and conference facilities.

The giant kiwifruit has been featured on NZ Post stamps in 1998 and 2014. The landmark building's two faces were originally both painted green, until a repaint in 2010 where one side was repainted green and the other yellow, to reflect the two most popular kiwifruit varieties. The giant kiwifruit contains a staircase to a viewing balcony near the top, which is open to the public during opening hours of Kiwi 360.

Te Puke Vintage Auto Barn, situated next door to Kiwi 360, had an impressive range of vintage cars, but was closed in November, 2006 because the elderly owner was no longer able to maintain the museum and no other investors were prepared to buy it. Now it has been transformed into a backpackers lodge.

All content from Kiddle encyclopedia articles (including the article images and facts) can be freely used under Attribution-ShareAlike license, unless stated otherwise. Cite this article:
Te Puke Facts for Kids. Kiddle Encyclopedia.