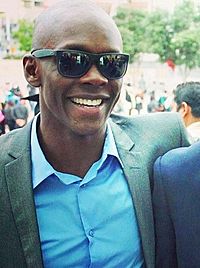 Israel Adesanya (born 22 July 1989) is a Nigerian-born professional mixed martial artist. He fights out of Auckland, New Zealand. He is signed to the Ultimate Fighting Championship (UFC). He is the current UFC Middleweight Champion. He has an undefeated MMA record of 19 wins and no losses. In kickboxing, Adesanya has a record of 75 wins and five defeats.

Adesanya was born in Lagos. He moved with his family to New Zealand at a young age. He lived in Rotorua for a time. At the age of 21, Adesanya moved to Auckland.

All content from Kiddle encyclopedia articles (including the article images and facts) can be freely used under Attribution-ShareAlike license, unless stated otherwise. Cite this article:
Israel Adesanya Facts for Kids. Kiddle Encyclopedia.