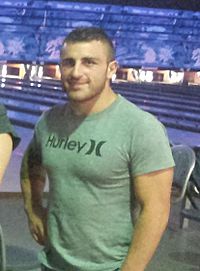 Alexander Volkanovski (Macedonian: Александар Волкановски; born 29 September 1988) is an Australian professional mixed martial artist. He is signed to the Ultimate Fighting Championship (UFC). He is the current UFC Featherweight Champion. His MMA record stands at 21 wins and one loss. He was a semi-professional rugby league player until 2012.

Volkanovski was born in Shellharbour, New South Wales. His father is Macedonian and his mother is Greek. He is married to Emma and has two children.

All content from Kiddle encyclopedia articles (including the article images and facts) can be freely used under Attribution-ShareAlike license, unless stated otherwise. Cite this article:
Alexander Volkanovski Facts for Kids. Kiddle Encyclopedia.