Lake Rotorua is a large shallow lake in the North Island of New Zealand.

The lake was formed from the crater of a large volcano. Its last major eruption was about 240,000 years ago. After the eruption, the magma chamber underneath the volcano collapsed. The circular depression left behind is the Rotorua Caldera, the site of the lake. Several other lakes of volcanic origin are nearby to the east around the active volcano Mount Tarawera.

The lake is large, 79.8 km2, but its mean depth is only 10 metres. It is in the Bay of Plenty region. The city of Rotorua is on its southern shore, and the town of Ngongotaha is at the western edge of the lake. 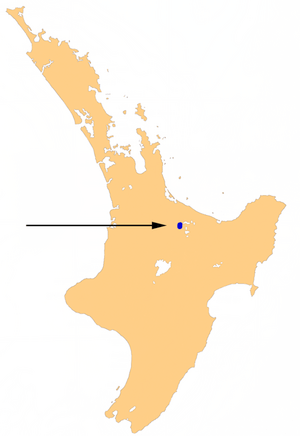 All content from Kiddle encyclopedia articles (including the article images and facts) can be freely used under Attribution-ShareAlike license, unless stated otherwise. Cite this article:
Lake Rotorua Facts for Kids. Kiddle Encyclopedia.