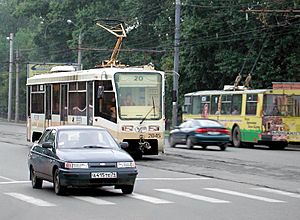 Tram and trolleybus in Chelyabinsk

Chelyabinsk is a city in the Chelyabinsk Oblast, Russia. The city is east of the Ural Mountains, on the Miass River, and on the border of Europe and Asia. The city has 1,130,132 people. As of 15 February 2013, the head of the city is Stanislav Mosharov. On February 15, 2013, a meteor hit the city.

Shortly after dawn on February 15, 2013, a superbolide meteor descended at over 55,000 kilometers per hour (34,000 mph) over the Ural Mountains, exploding at an altitude of 25–30 kilometers (16–19 mi) in a momentary flash as bright as the sun and generating a shock wave that injured over a thousand people. Fragments fell in and around Chelyabinsk. Interior Ministry spokesman Vadim Kolesnikov said 1,100 people had called for medical assistance following the incident, mostly for treatment of injuries from glass broken by the explosions. One woman suffered a broken spine. Kolesnikov also said about 600 square meters (6,000 sq ft) of a roof at a zinc factory had collapsed. A spokeswoman for the Emergency Ministry told the Associated Press that there was a meteor shower, however, another ministry spokeswoman was quoted by the Interfax news agency as saying it was a single meteor. The size has been estimated at 17 meters (56 ft) diameter with a mass of 10,000 or 11,000 metric tons. The power of the explosion was about 500 kilotons of TNT (about 1.8 PJ), which is 20–30 times more energy than was released from the atomic bomb exploded in Hiroshima. Luckily, thanks to the high altitude of the explosion the city managed to avoid large casualties and destruction.

The architecture of the Chelyabinsk is determined by the change of historical eras in the development of Russia. Before the revolution of 1917 the city was a trading centre, with numerous merchant buildings in style eclecticism and modern with elements Russian Revival architecture, they are stored on a pedestrian street Chelyabinsk “Kirovka”. 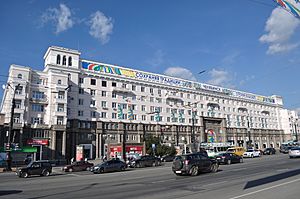 Since the late '30s in the city came a new era associated with construction of monumental buildings in the Stalinist architecture. It is in this style is constructed in substantially the center of the city of Chelyabinsk and central avenue.

With 60 years in the city was conducted intensive housing construction tower blocks. During this period the city had reached a population of one million people, and on his map there is such a large residential area as the "Severo-Zapad" (English: North-West). 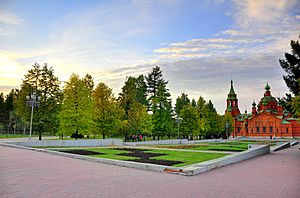 Since the '90s, market reforms, the city began an intensive construction of office buildings for business and major shopping malls in style postmodern architecture and high-tech.

Chelyabinsk has 17 public parks. The largest of them is one of the best in Russia - Chelyabinsk Central Park, named after Gagarin. Its territory is saved in the urban forest, where, among pine trees and granite rocks there are several picturesque ex-quarries now flooded with water. 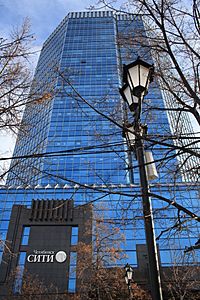 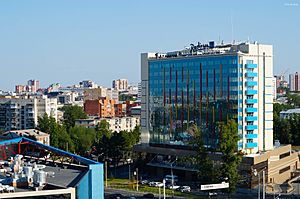 Chelyabinsk Watch Factory "Molnija" produces pocket, souvenir watches and technical watches for aircraft and ships. In 1980, the clock "Molnija" were given as gifts to participants of the Moscow Olympics Games.

Agro-industrial company "Makfa", Russia's largest producer of pasta, one of the five largest world producers of pasta. "Unichel" shoe firm is the largest manufacturer of footwear in Russia. Agricultural firm "Ariant" - leader in the production of meat products in the Urals Federal District of Russia, produces alcoholic and non-alcoholic beverages. American multinational corporation «Emerson» buying up shares of local businesses "Metran" organized in Chelyabinsk engineering center, building a factory for the production of industrial devices and equipment.

All content from Kiddle encyclopedia articles (including the article images and facts) can be freely used under Attribution-ShareAlike license, unless stated otherwise. Cite this article:
Chelyabinsk Facts for Kids. Kiddle Encyclopedia.