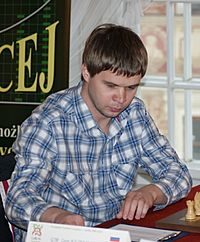 Igor Dmitrievich Kurnosov (Russian: Игорь Дмитриевич Курносов; 30 May 1985 – 8 August 2013) was a Russian chess grandmaster. In 2008, he won the Arctic Chess Challenge. He was also the winner of 2008/9 Hastings Masters tournament.

Kurnosov died after he was hit by a car in the early hours of 8 August 2013 in his hometown of Chelyabinsk. He was aged 28.

All content from Kiddle encyclopedia articles (including the article images and facts) can be freely used under Attribution-ShareAlike license, unless stated otherwise. Cite this article:
Igor Kurnosov Facts for Kids. Kiddle Encyclopedia.