Nakhchivan City (also, Nachitschewan, Nakhchyvan, Nakhicevan, Nakhichevan’, and Nakhjavan), is the capital of the Nakhchivan Autonomous Republic of Azerbaijan. It is 450 km west of Baku. The municipality of Nakhchivan has the city of Nakhchivan and the villages of Başbaşı, Qarağalıq, and Daşduz. Nakhchivan Airport (NAJ) is in the north of the city. 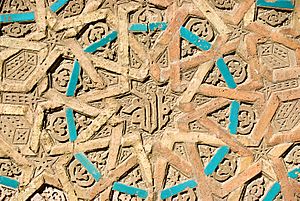 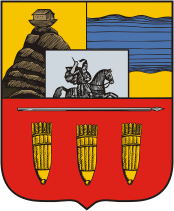 Nakhchivan City coat of arms under Imperial Russia (designed in 1843)

Local tradition states that Nakhichevan was founded by Noah after the Flood, and was his place of death and burial. According to Saint Movses Khorenatsi, King Tigranes I of Armenia settled Median prisoners of war at Nakhichevan in the second century BC. Nakhichevan is first mentioned in Ptolemy's Geographia as Naxouana (Greek: Ναξουὰνα).

Nakhichevan was destroyed by Shahanshah Shapur II in 363 and its Armenian and Jewish population was deported to Iran. Emperor Heraclius travelled through the city en route to Atropatene in 623 during the Byzantine–Sasanian War of 602–628.

The Arab siege of Nakhichevan in 650 led Theodore Rshtuni to conclude a truce. After the rebellion of 703, Muhammad ibn Marwan had the rebel nobles burnt alive in churches in Nakhichevan and Goghtn in 705. Nakhichevan temporarily came under the control of the Kingdom of Armenia in c. 900, but was swiftly taken by Muhammad ibn Abi'l-Saj. The city was the temporary refuge of Atabeg Nusrat al-Din Abu Bakr after his defeat at the Battle of Shamkor in 1195, and Nakhichevan was conquered by the Kingdom of Georgia in 1197.

In 1225, Nakhichevan was ruled by al-Maleka al-Jalāliya, daughter of Atabeg Muhammad Jahan Pahlavan. Genoese merchants were known to trade in the city by 1280. The city was conquered by Timur in 1401, but was taken by King George VII of Georgia in 1405.

Nakhichevan was annexed to the Russian Empire per the Treaty of Turkmenchay in 1828. The city became the centre of the Nakhichevansky Uyezd in the Erivan Governorate in 1849. In 1896, Nakhichevan had a population of 7,433, roughly two-thirds of which were Azeri-speaking Muslims and one-third Armenian Christians.

After the February Revolution of 1917, a soviet was formed in Nakhichevan, but the city was under the control of the Special Transcaucasian Committee from March to November 1917, and its successor the Transcaucasian Commissariat from November 1917 to March 1918. Turkey occupied Nakhichevan from June until November, after which the city was occupied by British soldiers in January 1919, and a military governor was appointed to administer Nakhichevan.

It was decided that Nakhichevan would be granted to Armenia on 6 April 1919, and the city was annexed on 6 June 1919. Britain, France, Italy, and the US, with approval from Armenia and Azerbaijan, agreed on 25 October 1919 to appoint American Colonel Edmond D. Daily as General-Governor of Nakhichevan, elections would be held, and both Armenia and Azerbaijan would withdraw its forces from the territory. However, in March 1920, Turkish forces led by Kâzım Karabekir occupied Nakhichevan.

Soviet Russia took control of Nakhichevan on 28 July 1920, and the city became part of the newly formed Nakhichevan Soviet Socialist Republic. The Treaty of Moscow of 16 March 1921, and later the Treaty of Kars of 21 October 1921, between Russia and Turkey agreed that Nakhichevan would be an autonomous territory under the protection of Azerbaijan and delimited its borders with Turkey.

Nakchivan is one of the Azerbaijan's main centres of education. Universities here are:

Football and Futsal are the most popular sports in Nakhchivan. The city's Araz Naxçivan is one of the top futsal clubs in the European futsal arena. They regularly participate in UEFA Futsal Cup.

All content from Kiddle encyclopedia articles (including the article images and facts) can be freely used under Attribution-ShareAlike license, unless stated otherwise. Cite this article:
Nakhchivan (city) Facts for Kids. Kiddle Encyclopedia.