The Nakhchivan Autonomous Republic is a landlocked exclave of Azerbaijan. The region covers 5,500 km². It borders Armenia to the east and north, Iran to the south and west, and Turkey to the northwest.

Nakhchivan has a long history dating back to the Neolithic period. Armenia had the area for a thousand years. Nakhchivan became part of the Safavid dynasty of Persia in the sixteenth century. After the last Russo-Persian War, the Nakhchivan khanate became part of the Russian Empire in 1828. The region has had much bloodshed between Armenians and Azerbaijanis. They both claim the region.

In June 1918, the region came under the Ottomans. Under the Armistice of Mudros, the Ottomans agreed to leave. The British then had control.

In July 1920, Soviets took over the region. This began seventy years of Soviet Rule. In January 1990 Nakhchivan became independent from the USSR. A year later they joined the newly independent Republic of Azerbaijan.

The capital is the city of Nakhchivan. 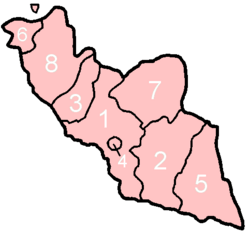 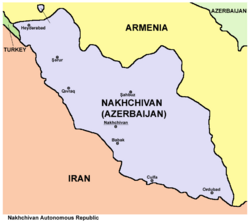 Nakhchivan has eight divisions. Seven of these are raions. The capital city is separate.

All content from Kiddle encyclopedia articles (including the article images and facts) can be freely used under Attribution-ShareAlike license, unless stated otherwise. Cite this article:
Nakhchivan Autonomous Republic Facts for Kids. Kiddle Encyclopedia.