President of Azerbaijan facts for kids

The president of the Republic of Azerbaijan is the head of state of Azerbaijan. The Constitution states that the president is the embodiment of executive power, commander-in-chief, "representative of Azerbaijan in home and foreign policies", and "shall have the right of immunity [from prosecution]." The president rules through his executive office, the Presidential Administration, consisting of a group of secretaries and departmental ministers. Additionally, there is a Cabinet of Ministers regarding economic and social policy and a Security Council regarding foreign, military, and judicial matters.

The primary workplace is the presidential building (also known as the presidential apparatus) on Istiglaliyyat Street in Baku. Ilham Aliyev, son of the former president, Heydar, was elected the 4th and current president on 31 October 2003 after his father's resignation due to his deteriorating health and eventually died several months later.

Candidates for the position must be Azerbaijani citizens without age restrictions and have lived in Azerbaijan for at least 10 years. According to the Constitution of Azerbaijan, the same person can be on the post of President an unlimited number of terms.

Each faction in the National Assembly has the right to nominate a candidate for the presidential elections. The minimum number of signatures for a presidential candidate fielded by a political party with no parliamentary representation is 40,000, before amendments to the law.

Prior to 2009, the term of office was five years, with a maximum of two terms. A referendum in 2009 removed the limit on the number of terms, and in 2016, another referendum increased the term to seven years. According to the Azerbaijani administration, a longer term would provide for more continuity in decision-making. The Venice Commission, of which Azerbaijan is a member, warned that this and other provisions of the referendum gave "unprecedented" authority to the president, and could severely upset the balance of power.

The official inauguration ceremony of the President is not publicly held, occurring with the participation of officials of the Azerbaijan state (representatives of political parties, public organizations, military personnel, religious figures), members of the government, deputies of the National Assembly, members of the president's family, as well as foreign representatives and other invited guests.

It is held within three days after the confirmation of the elected president by the Constitutional Court, during which the president takes the following oath:

Then the person elected President of Azerbaijan puts his right hand on the Koran and takes the following oath:

"I will remain faithful to the national moral values and traditions created by the Azerbaijani people for centuries, and I will always hold them high."

Guarantor of the Constitution

The president serves as the Supreme Commander-in-Chief of the Azerbaijani Armed Forces. In this capacity, he has the power to declare a martial law.

Agencies under the president

The Office of the President of Azerbaijan is the executive administration of President, and is in charge of fulfilling the constitutional responsibilities of the President. The headquarters of office is located on Istiglaliyyat Street in Baku. It is currently headed by Samir Nuriyev. 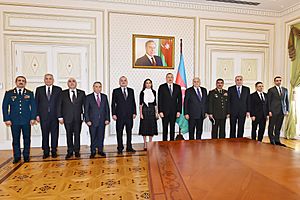 A meeting of the security council.

Main page: Flag of the President of Azerbaijan 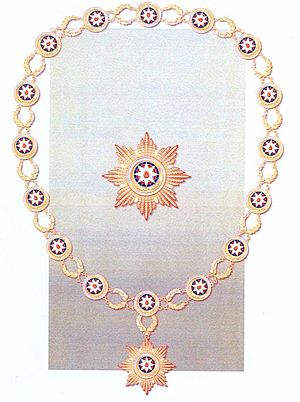 Badge of the President.

The badge of the president (Prezidentinin döş nişanı) was approved by decree on September 15, 2008. It is in the shape of an octagonal star made of 18 carat gold, placed in a circle with a diameter. In the center is a mined image of the State Emblem of Azerbaijan, which is surrounded by two rings and 60 diamonds are lined up between the rings.

The main (since 2008) presidential residence is Zagulba (Azerbaijani: Zaqulba). Also, the president has several part-time residences outside of Baku:

As well as several vacation residences: 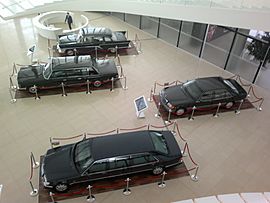 National transport services for the Azerbaijan president are provided by the Special Purpose Garage, which is a unit within the Special State Protection Service.

The presidential aircraft uses the same colour scheme as standard AZAL aircraft, except for the use of the Azerbaijan coat of arms or the Presidential Standard on the empennage instead of the flag of Azerbaijan.

Presidents of the Republic of Azerbaijan (1990–present)

For leaders before independence, see List of heads of state of Azerbaijan.

All content from Kiddle encyclopedia articles (including the article images and facts) can be freely used under Attribution-ShareAlike license, unless stated otherwise. Cite this article:
President of Azerbaijan Facts for Kids. Kiddle Encyclopedia.