Ali Hidayat oğlu Asadov (born 30 November 1956) is an Azerbaijani politician currently serving as the Prime Minister of Azerbaijan following his appointment to the post on 8 October 2019 by president Ilham Aliyev.

Ali Asadov was born on 30 November 1956 in the Nakhchivan AR. In 1974 he graduated from secondary school No.134 in Baku, and entered the Plekhanov Russian University of Economics in Moscow, from which he graduated in 1978. He served in the Army from 1978 to 1980.

In 1989-1995, Ali Asadov worked as an associate Professor and head of the Department at the Baku Institute of Social Management and Political Science. 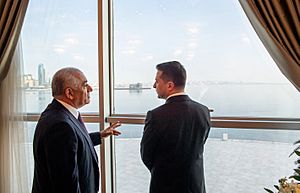 In the 1st Azerbaijan Parliamentary Election held on 12 November 1995, Ali Asadov was elected an MP by proportional representation for the term of 1995-2000, representing New Azerbaijan Party.

All content from Kiddle encyclopedia articles (including the article images and facts) can be freely used under Attribution-ShareAlike license, unless stated otherwise. Cite this article:
Ali Asadov Facts for Kids. Kiddle Encyclopedia.