Navasota is a city in Grimes County, Texas, United States. The population was 7,049 at the 2010 census, rising to an estimated 7,476 in 2015. In 2005, the Texas Legislature named the city "The Blues Capital of Texas", in honor of the late Mance Lipscomb, a Navasota native and blues musician.

Navasota is located in southwestern Grimes County, east of the Navasota River, a tributary of the Brazos River. Texas State Highway 6 passes through the eastern side of the city as a four-lane bypass, leading northwest 22 miles (35 km) to College Station and south 21 miles (34 km) to Hempstead. Texas State Highway 105 passes through the center of Navasota, leading southwest 25 miles (40 km) to Brenham and east 41 miles (66 km) to Conroe. Houston is 71 miles (114 km) southeast of Navasota.

Navasota was founded in 1831 as a stagecoach stop named "Nolansville". Its name was changed in 1858 to Navasota, a name perhaps derived from the Native American word nabatoto ("muddy water").

After September 1859, when the Houston and Texas Central Railway built into the town, Navasota became important as a shipping and marketing center for the surrounding area. When nearby Washington-on-the-Brazos protested the coming of the rails, the old historic town forfeited its geographic advantage, and it began to decline as many of its businesses and residences began a sure migration to the new railhead 7 miles (11 km) to the northeast across the Brazos River at Navasota.

Slaves were a large part of the local economy, as they were imported, traded and used to work in the many local cotton plantations. Guns were made in nearby Anderson, and cotton, gunpowder, and shoes were made, processed and stored there for the Confederacy during the American Civil War. By 1865 the population was about 2,700. All during the Civil War, all the marketable goods produced in the region were brought to Navasota, then the furthest inland railhead in Texas, to be shipped south to Galveston, where it could be transported by steamboat from the Texas coast and up the Mississippi River to the war effort, or exported to Mexico or overseas to Europe.

Navasota suffered a series of disasters in the mid-1860s that severely depleted its population. In 1865 a warehouse filled with cotton and gunpowder exploded after it was torched by vagrant Confederate veterans; the blast killed a number of people and started a fire that destroyed much of the original downtown, and damaged many buildings, including the post office. Not long afterward the town was struck by a deadly cholera epidemic, which was followed in 1867 by an even more dangerous epidemic of yellow fever. As many Navasota citizens, including the mayor, fled to escape the disease, the town population dropped by about 50 percent.

In 1908, Navasota was a lawless boom town, wracked by violence: "shootouts on the main street were so frequent that in two years at least a hundred men died." Hamer faced down, chased down, and beat down the Navasota toughs until the streets were quiet, and children could once again go downtown. He relentlessly fought the various power factions, and one day fought one perceived local warlord in the mud on Main Street, throwing him in jail and defying all comers, as the rest of the troublemakers began to search for cover. He served as marshal until 1911. Hamer became more widely known in 1934 as one of the men who shot Bonnie and Clyde. In 2012, the Navasota city council voted to commission a local sculptor to erect a statue of Frank Hamer in front of the new city hall building.

As of 2015, the population was estimated at 7,476. The industrial sector of the community now boasts 23 companies and over 1,200 jobs. In 2009, Navasota was selected as a "Visionaries in Preservation" city by the Texas Historical Commission to protect the numerous historic structures in the city. A new municipal building was completed in 2011, and continued downtown improvements are under construction, with completion scheduled in 2013.

In 2012, Navasota Municipal Airport completed an expansion of its runway to 5,000 feet (1,500 m) long by 75 feet (23 m) wide, now allowing jets on the runway. Area residents became fearful of more violence and drugs being flown in. This fear was based on the infamous Navasota area/Mexico drug flights and federal law enforcement arrests of the 1980s.

The city of Navasota earned a 2011 Gold Leadership Award from the Texas Comptroller's Office for efforts in transparency. Its application scored 17 of 20 points. Navasota was one of 70 (out of over a thousand) cities in Texas to receive the Gold status. It also received the award in 2013.

In 2012, Navasota was named by the Union Pacific Railroad as a "Train Town USA".

In August 2013, Navasota was named a Go Texan "Certified Retirement Community" by the Texas Department of Agriculture. 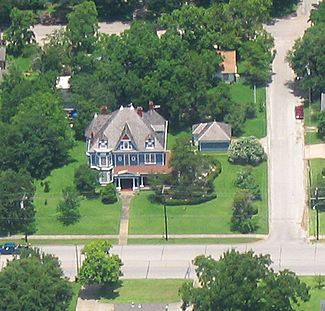 Navasota has some shops and artisans in its historic downtown district, typified by antique, gift, and junk stores housed in old classic stone and brick structures, and live plays at the Sunny Furman Theatre. Navasota Blues Alley is in the heart of the downtown district, and offers blues memorabilia, museum exhibits, art, vintage music and radios, and much more. The city also has golfing facilities and parks, as well as wineries.

Navasota retains a number of historic Victorian homes on Washington Avenue, the main residential and commercial thoroughfare through town. Another historic edifice is Brule Field, a natural amphitheater built out of native stone by the Great Depression-era Works Progress Administration. It served as the primary grid for the local high school football team, the Navasota Rattlers, until the new stadium was constructed in 2006. Several native-stone churches also remain near downtown, with distinctive Victorian fronts.

The city is also home to two statues of French explorer René-Robert Cavelier, Sieur de La Salle, including a bronze monument, dedicated in 1936 by the DAR, to celebrate the travels of the famous French explorer. The second is a stone bust that was previously in downtown, and was rededicated by the French consulate in May 2012 at August Horst Park. The bust was donated to the city by the French government in 1978. Supposedly, La Salle was murdered by one of his men near present-day Navasota, while looking for the Mississippi Valley and the way back to French-held lands near the Great Lakes. After numerous voyages, explorations of the Mississippi valley, trading ventures and several mutinies, La Salle's bones are believed to have found their resting place in the Navasota Valley.

Seasonally, Navasota is visited in the spring for bluebonnets. The Blues Bluebonnets & BBQ music festival is held in April, celebrating the birthday of Mance Lipscomb. A summer festival, the Navasota Bluesfest, every second weekend in August in the Blues Capital of Texas, honors the memory of blues man Mance Lipscomb, who recorded numerous albums and lived in Navasota all of his life. The celebration raises money for college scholarships for local students. A statue of Mance Lipscomb is now a part of Mance Lipscomb Park, near downtown. A statue of Frank Hamer stands in front of city hall, honoring the time he served as city marshal, connecting to the time Mance Lipscomb was his buggy driver. Local artist and sculptor Russell Cushman designed and built the bronze statue.

Of the 2,206 households, 37% had children under the age of 18 living with them, 43.5% were married couples living together, 20.8% had a female householder with no husband present, and 29% were not families. About 25.1% of all households were made up of individuals, and 10.4% had someone living alone who was 65 years of age or older. The average household size was 2.81 and the average family size was 3.39.

All content from Kiddle encyclopedia articles (including the article images and facts) can be freely used under Attribution-ShareAlike license, unless stated otherwise. Cite this article:
Navasota, Texas Facts for Kids. Kiddle Encyclopedia.