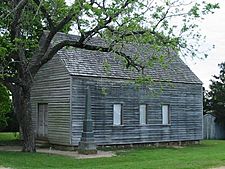 Replica of the building at Washington-on-the-Brazos where the Texas Declaration was signed. The inscription reads: "Here a Nation was born." 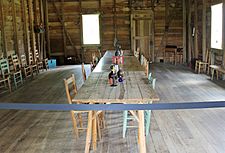 Inside the building where Texan independence was declared on March 2, 1836 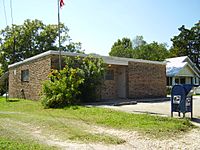 Founded largely by immigrants from the southern United States, Washington-on-the-Brazos is known as "the birthplace of Texas" because it was here that, on March 1, 1836, Texas delegates met to formally announce Texas' intention to separate from Mexico and to draft the constitution of the new Republic of Texas. They organized an interim government to serve until a government could be elected and inaugurated.

The delegates declared independence on March 2, 1836. They adopted their constitution on March 16. The delegates worked until March 17, when they had to flee with the residents of Washington, to escape the advancing Mexican Army. The townspeople returned after the Mexican Army was defeated at San Jacinto on April 21. Town leaders lobbied for Washington’s designation as the permanent capital of the Republic of Texas, but leaders of the Republic favored Waterloo, which later was renamed Austin.

Washington County was established by the legislature of the Republic of Texas in 1836 and organized in 1837, when Washington-on-the-Brazos was designated as the county seat. Although the county seat moved to Brenham in 1844, the town continued to thrive as a center for the cotton trade until the mid-1850s, as it was located on the Brazos River to use for shipping out the crop. The construction of railroads bypassed the town and pulled off its business. The strife of the Civil War took another toll on the town, and by the turn of the 20th century it was virtually abandoned.

The State of Texas purchased 50 acres (20 ha) of the old townsite in 1916 and built a replica of the building where the delegates met. The state acquired more of the site in 1976 and 1996.

Located between Brenham and Navasota off State Highway 105, the site is now known as Washington-on-the-Brazos State Historic Site. It covers 293 acres (119 ha), and features three main attractions: Independence Hall, Barrington Living History Farm, and the Star of the Republic Museum, which is administered by Blinn College. The site's visitor center is free and includes interactive exhibits about the Texas Revolution and the park's attractions, a gift shop, a conference center and an education center.

The Barrington Living History Farm is a living museum homestead that represents the mid-19th-century farm founded by Dr. Anson Jones, the last President of the Republic of Texas. Costumed interpreters raise cotton, corn, cattle and hogs using period techniques. The 1844 Anson Jones Home was moved to the site in 1936 as part of the Texas Centennial Celebration. The reconstructed outbuildings include two slave cabins, a kitchen building, a smokehouse, a cotton house and a barn. The farmstead opened in 2000, and is operated by the Texas Parks and Wildlife Department.

All content from Kiddle encyclopedia articles (including the article images and facts) can be freely used under Attribution-ShareAlike license, unless stated otherwise. Cite this article:
Washington-on-the-Brazos, Texas Facts for Kids. Kiddle Encyclopedia.