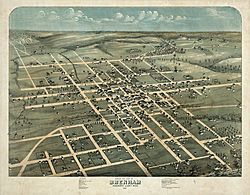 Brenham ( BREH-nəm) is a city in east-central Texas in Washington County, United States, with a population of 15,716 according to the 2010 U.S. census. It is the county seat of Washington County. Brenham is south of College Station, and about halfway between Houston and Austin approximately 70 miles (110 km) northwest of Houston, and about 90 miles (140 km) east of Austin.

Brenham is renowned as the heart of the bluebonnet region in Central Texas. The local chamber of commerce promotes the Bluebonnet Trails and offers free maps to guide visitors along the most scenic wildflower routes, which also pass historic sites and attractions.

Washington County is known as the "Birthplace of Texas," as it contains the site of the signing of the Texas Declaration of Independence on March 2, 1836 in the town of Washington-on-the-Brazos. This is now a state historic site.

Brenham is also known for its annual German heritage festival that takes place each May called Maifest, similar to Volksfest. Numerous German immigrants settled here in the mid-nineteenth century, following the Revolutions in German states in 1848. Brenham is also the Home of "The World's Largest BBQ Pit" on 290 West.

According to the United States Census Bureau, the city has a total area of 8.8 square miles (22.7 km²), all of it land. 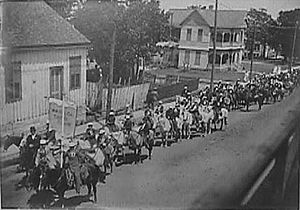 Washington County Boys' Corn Club mounted and in parade, May 26, 1910

College students make up about half of the population of Brenham. As of 2014, the 17,707 students enrolled at Blinn College amounted to an estimated 51.4% of the city's population.

Bluebonnet Cabs offers taxi service in and around the Brenham area. 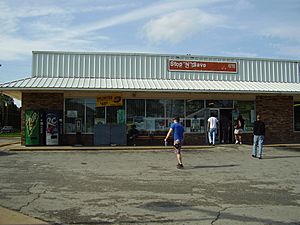 Stop N'Save, which had served as the terminal for Greyhound Lines-affiliated operations

Until 2009 Greyhound Lines offered bus services from the Stop N'Save at 601 East Main Street, but as of 2015 Brenham is not served by intercity bus. The population has increased steadily, but people have preferred to rely on their privately owned automobiles for transportation.

Brenham is also the home of Blinn College, the oldest county-owned junior college in Texas. Blinn has campuses also in Bryan, Schulenburg, and Sealy. 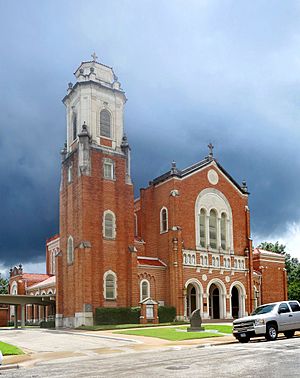 All content from Kiddle encyclopedia articles (including the article images and facts) can be freely used under Attribution-ShareAlike license, unless stated otherwise. Cite this article:
Brenham, Texas Facts for Kids. Kiddle Encyclopedia.