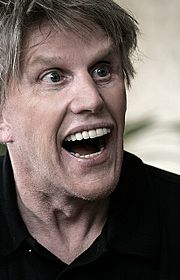 Gary Busey (born June 29, 1944) is an American actor. He has appeared in many movies and television shows since the 1970s. In 1988, He was involved in a motorcycle accident, but he recovered. His elder son Jake Busey (born 1971) is also an actor.

Busey was a contestant in two celebrity series of The Apprentice (2011 and 2013). He won the August-September 2014 series of Celebrity Big Brother UK.

All content from Kiddle encyclopedia articles (including the article images and facts) can be freely used under Attribution-ShareAlike license, unless stated otherwise. Cite this article:
Gary Busey Facts for Kids. Kiddle Encyclopedia.