The Western Gulf coastal grasslands (Spanish: Pastizales costeros del Golfo Occidental) are a subtropical grassland ecoregion of the southern United States and northeastern Mexico. It is known in Louisiana as the "Cajun Prairie", Texas as "Coastal Prairie," and as the Tamaulipan pastizal (Spanish: Pastizal Tamaulipeco) in Mexico. 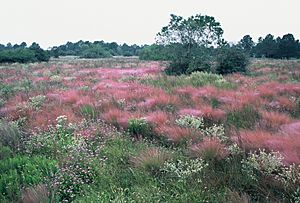 The ecoregion covers an area of 77,425 km2 (29,894 sq mi), extending along the shore of the Gulf of Mexico from southeastern Louisiana (west of the Mississippi Delta) through Texas and into the Mexican state of Tamaulipas as far as the Laguna Madre. Specific areas include a number of barrier islands, and the resacas or natural levees of the Laguna Madre. The coast is vulnerable to tropical storms that can seriously damage habitats.

This ecosystem is edaphic in origin; the soils in this region are of a heavy clay that contributed to difficulty for woody species to establish, allowing grasses and herbaceous species to be more competitive.The region name, though, is a bit of a misnomer. It is not a wide open, treeless prairie; instead, the grassy areas are broken up by many pockets/groves of forest, usually along water courses, or isolated silt/sand pockets among the substrate (where the soil is more permissive for tree growth).

The natural habitat of the area is a mix of tallgrass prairie similar to those found in inland Texas, with Indiangrass (Sorghastrum nutans), big bluestem (Andropogon gerardi), little bluestem (Schizachyrium scoparium), and switchgrass (Panicum virgatum) the primary tallgrass species that are typical of the coastal prairie, with several other shorter grasses and many herbaceous and woody species.

In addition, the region has bottomland forests lining the floodplains of the many waterways in the region. In the wetter regions along the upper Texas coast and Louisiana, the tree species include many of those seen in forest of the Southern United States, such as the southern live oak, bald cypress, magnolia, loblolly pine, post oak, and southern hackberry.

This coast is rich in wildlife, and 700 species of birds, animals and reptiles have been counted here, although many are now threatened or endangered. This coast is a critical habitat for the Attwater's prairie chickens (Tympanuchus cupido attwateri), over one million of which inhabited the prairie in Texas and Louisiana in the 19th century, but extreme reduction of their habitat put them on the U.S. endangered species list in 1967. Another endangered bird of the coast is the whooping crane (Grus americana). Many species of wading birds, shorebirds, and other waterbirds are abundant. Birds in the Mexican part of the region include Morelet’s seedeater (Sporophila morelleti), red-billed pigeon (Columba flavirostris), brown jay (Cyanocorax morio), Neotropic cormorant, white-winged dove (Leptotila verrequxi) and Audubon's oriole (Icterus graduacauda).

Less than 1% of the ecoregion remains in pristine condition, almost entirely in Texas, while most of the coast has been converted to farmland, including rice paddies, grazing land, or urban areas including Houston, Texas. Estuaries and other coastal wetlands are better preserved than the prairie and indeed the protected areas of the coast are mainly sanctuaries for waterbirds.

All content from Kiddle encyclopedia articles (including the article images and facts) can be freely used under Attribution-ShareAlike license, unless stated otherwise. Cite this article:
Western Gulf coastal grasslands Facts for Kids. Kiddle Encyclopedia.