The neotropic cormorant or olivaceous cormorant (Phalacrocorax brasilianus) is a medium-sized cormorant found throughout the American tropics and subtropics, from the middle Rio Grande and the Gulf and Californian coasts of the United States south through Mexico and Central America to southern South America, where it is called by the Indian name of biguá. It also breeds on the Bahamas, Cuba and Trinidad. It can be found both at coasts (including some mangrove areas) and on inland waters. There are at least two subspecies: P. b. mexicanus from Nicaragua northwards and P. b. brasilianus further south. In Peru the neotropic cormorant is used by the Uru people for fishing.

The species was documented in 1658 by Willem Piso after travels in Brazil. This formed the basis for the description and naming of the species by Johann Friedrich Gmelin in 1789. Many later authors preferred to use the name Phalacrocorax olivaceus based on Alexander von Humboldt's 1805 description because the identity of Piso's birds was considered uncertain. Recently, many authorities such as the American Ornithologists' Union have begun to use Phalacrocorax brasilianus after M. Ralph Browning argued that Piso's description and paintings do indeed refer to the neotropic cormorant.

This bird is 64 cm (25 in) long with a 100 cm (39 in) wingspan. Adults males weigh from 1.1 to 1.5 kg (2.4 to 3.3 lb), adult females 50 to 100 g (1.8 to 3.5 oz) less. Birds of the southern populations tend to be bigger than the more northerly birds. It is small and slender, especially compared to the larger, heavier-looking double-crested cormorant. It has a long tail and frequently holds its neck in an S-shape. Adult plumage is mainly black, with a yellow-brown throat patch. During breeding, white tufts appear on the sides of the head, there are scattered white filoplumes on the side of the head and the neck, and the throat patch develops a white edge. The upper wings are somewhat grayer than the rest of the body. Juveniles are brownish in color.

Its diet consists mainly of small fish, but will also eat tadpoles, frogs, and aquatic insects. Information about its prey is sparse, but inland birds seem to feed on small, abundant fish in ponds and sheltered inlets, less than 10 cm (3.9 in) in length, with an individual weight of a gram or two, such as Poecilia species especially the sailfin molly Poecilia latipinna. This cormorant forages for food by diving underwater, propelling itself by its feet. Its dives are brief, between 5 and 15 seconds. It is also known to forage in groups, with several birds beating the water with their wings to drive fish forward into shallows.

Neotropic cormorants are monogamous and breed in colonies. The nest is a platform of sticks with a depression in the center circled with twigs and grass. It is built a few meters above the ground or water in bushes or trees. Up to five chalky, bluish-white eggs are laid. Most pairs lay three eggs, but the mean number hatched is less than two. The eggs soon become nest-stained. Both sexes incubate for about 25–30 days, and both parents feed the young until around the 11th week. By week 12, they are independent. One brood is raised per year.

Unlike other cormorants, this bird can often be seen perching on wires.

This bird is largely a permanent resident, with some birds occasionally wandering north in the warmer months. 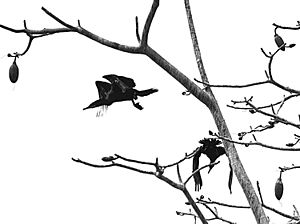 All content from Kiddle encyclopedia articles (including the article images and facts) can be freely used under Attribution-ShareAlike license, unless stated otherwise. Cite this article:
Neotropic cormorant Facts for Kids. Kiddle Encyclopedia.