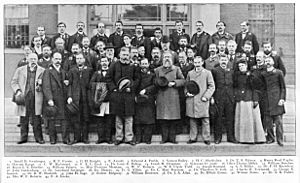 Participants in the 13th AOS congress

It was founded in September 1883 by Elliott Coues, Joel Asaph Allen, and William Brewster.

The South American Classification Committee (SACC) is a committee under the AOU. It deals with creating a standard classification, with English names. This is for the bird species of South America.

All content from Kiddle encyclopedia articles (including the article images and facts) can be freely used under Attribution-ShareAlike license, unless stated otherwise. Cite this article:
American Ornithologists' Union Facts for Kids. Kiddle Encyclopedia.