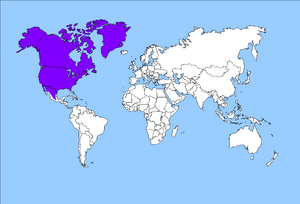 The Nearctic is one of the eight terrestrial ecozones dividing the Earth's land surface.

In ecology, an ecozone is a large land mass that contains many terrestrial ecoregions, each of which has unique plants and animals.

The Nearctic ecozone covers most of North America, including Greenland and the highlands of Mexico.

Southern Mexico, southern Florida, Central America, and the Caribbean islands are part of the Neotropic ecozone, together with South America.

The World Wide Fund for Nature (WWF) divides the Nearctic into four Bioregions, defined as "geographic clusters of ecoregions that may span several habitat types, but have strong biogeographic affinities, particularly at taxonomic levels higher than the species level (genus, family)."

All content from Kiddle encyclopedia articles (including the article images and facts) can be freely used under Attribution-ShareAlike license, unless stated otherwise. Cite this article:
Nearctic Facts for Kids. Kiddle Encyclopedia.