Culture of Texas facts for kids 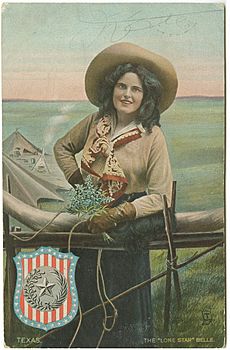 The culture of Texas is often considered one of the major cultures influencing the greater American culture. Texas is both one of the most populous and populated American states in its urban centers, and has seen tremendous waves of migration out of the American North and West in contrast to its eastern neighbors in the Deep South. But it retains the regionalisms and distinct cultural identities of Tejanos, Cajuns, Irish, African American, and Anglo American enclaves established prior to the republic era and admission to statehood.

Texans will tend to acknowledge the five major regions, East Texas, Central Texas, North Texas, South Texas and West Texas as regions within the state defined by urban centers and differing cultural norms. The Texas Triangle, anchored by Houston, Dallas-Fort Worth, and San Antonio, is an interstate corridor between the three major Texan cities closest to the geographic center, that anchor three different cultural regions of the state.

It is a border between the western prairies, the Deep South, and Mexico, influenced by Hispanic, African and Anglo traditions. It is a place of island communities from Germany, Czechoslovakia, Poland, Mexico, southern African American and Anglo populations, and historic tribes of Native Americans. Its culture is a complex blending and separation of the cultures different people originally brought with them to Texas. Its African American community contributed to the blues through various artists, and it is the only place in world where its past musicians such as Adolph Hofner sang Western Swing Style music in Czech and German. It is larger in size than most European nations. Its geography, climate, people, neighboring regions, and size make it far too diverse to be classified in any other way than one truly of its own. Texas is placed in the Southern United States by the United States Census Bureau.

Texas has a strong ranching tradition which has had significant influence on American cowboy culture, particularly in rodeo.

Rodeo is the official sport of Texas. The annual Houston Livestock Show and Rodeo is the world's largest known rodeo. It is held over 20 days from late February through early March. The event begins with trail rides that originate from several points throughout the state, all of which convene at Reliant Park for a barbecue cook-off. The rodeo includes typical rodeo events, as well as concert performances from major artists and carnival rides. The Fort Worth Livestock Show and Rodeo lasts three weeks in late January and early February. It has many traditional rodeos, but also a cowboy rodeo, and a Mexican rodeo in recent years that both have large fan bases. 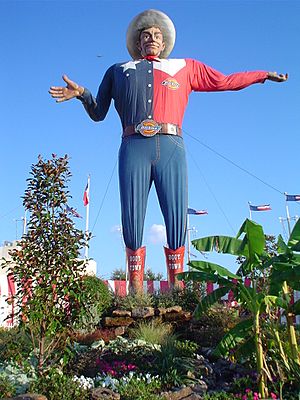 Big Tex, mascot of the State Fair of Texas since 1952

The big State Fair of Texas, one of the largest state fairs in the United States by attendance, is held in Dallas each year between late September through mid- to late October at Fair Park. Two noteworthy college football games, the Red River Rivalry between the University of Oklahoma Sooners and the University of Texas Longhorns, and the State Fair Classic between the Grambling State University Tigers and the Prairie View A&M University Panthers are played at the Cotton Bowl in Fair Park during the State Fair. The State Fair is known for its fried food, particularly the corn dogs. The State Fair is also home to the Texas Star, the tallest Ferris wheel in the Western Hemisphere, and Big Tex, a 55-foot-tall (17 m) cowboy statue.

The history of Texas, particularly of the old independent Republic of Texas, is intimately bound up with its present culture. Frontier Texas! is a museum of the American Old West in Abilene. The Texas Historical Commission is an agency dedicated to historic preservation within the state of Texas. The Texas State Historical Association publishes an encyclopedia on Texas history, geography, and culture called the Handbook of Texas.

See also: Folklore of the United States and Tall tales

Texas has a considerable independent body of folklore, primarily in connection with its historical ranching and cowboy cultures, the American Old West, and the Texas War of Independence. The Texas Folklore Society is the second-oldest folklore organization continually functioning in the United States. Many well-known figures and stories in American folklore are associated with Texas:

The Lone Star State helped popularize this musical style throughout the world and made the Texas cowboy an international icon that would forever be identified with country music. Although many people may think of country music when they think of the Lone Star State, Texas actually encompasses a wide variety of ethnic musical genres and regional styles.

Texas has a vibrant live music scene in Austin boasting more music venues per capita than any other U.S. city, befitting the city's official slogan as The Live Music Capital of the World. Austin's music revolves around the many nightclubs on 6th Street and an annual film, music, and multimedia festival known as South by Southwest. The longest-running concert music program on American television, Austin City Limits, was videotaped at the University of Texas at Austin campus. Austin City Limits and Waterloo Records run the Austin City Limits Music Festival, an annual music and art festival held at Zilker Park in Austin.

In Houston, the annual Free Press Summer Fest is a major draw as well as the entertainment lineups at the annual Houston Livestock Show and Rodeo. Notable music venues for Houston are Fitzgerald's, Warehouse Live, and Walter's among others. Many renowned musicians' origins are in Houston including Lyle Lovett, Beyoncé, Clint Black, The Crusaders, Lightnin' Hopkins, and Kenny Rogers as well as groups including D.R.I., Helstar, La Mafia, the Geto Boys, and ZZ Top. The Houston Symphony and Houston Grand Opera are both attractions of the Houston Theater District.

The Texas Folklife Festival is an annual event sponsored by the University of Texas at San Antonio's Institute of Texan Cultures celebrating the many ethnicities represented in the population of the state of Texas. Thousands attend the three-day event each year, which features food, crafts, music and dances from ethnic groups that immigrated to Texas.

A 2015 report by non-profit organization Mission: Readiness found that 73% of military-aged youth in Texas were physically ineligible for military service due to issues with obesity and ill-health, a rate much higher than the national average.

Texas is well known for its love of football at all levels. Watching football is a dominant leisure activity across the state, and autumn weekends are filled with high school games on Friday nights, NCAA and other college games on Saturdays (Texas' 12 top-level or "FBS" schools are more than any other state), and the NFL's Dallas Cowboys and Houston Texans on Sundays. Texas high school football fans are famously passionate, and the various teams often become the obsessive pride of the towns they represent. This phenomenon was documented in the 1990 book Friday Night Lights: A Town, a Team, and a Dream and its popular film and television adaptations. School districts in Texas are sometimes criticized for the amount of money spent on their sports programs and facilities; for example, the Allen Independent School District spent $60 million to open Eagle Stadium in 2012, only to see it closed in 2014 due to serious structural problems. However, this spending is often driven by local residents—the Allen stadium was built using funds from a publicly approved bond issue.

Other popular sports in Texas include golf (which can be played year-round because of the South's humid climate), basketball (the state's three NBA teams, the Houston Rockets, San Antonio Spurs, and Dallas Mavericks, have all won league titles), fishing, and auto racing, particularly at the Texas Motor Speedway in Fort Worth. Lacrosse, originally played by some of the indigenous tribes, is a visible sport and growing. Soccer is a popular participatory sport—especially among children—but as a spectator sport, it does not yet have a large following despite two Texan teams in Major League Soccer. Ice hockey has been a growing participatory sport in the Dallas/Fort Worth area since the Minnesota North Stars became the Dallas Stars in 1993. Minor league professional hockey has since grown and is also home to the San Antonio Rampage and Texas Stars of the American Hockey League and the Allen Americans of the ECHL. Texas was home to many Central Hockey League and Western Professional Hockey League teams prior to the leagues' dissolution. Some of the organizations involved with the former leagues launched junior ice hockey teams in the North American Hockey League and the league headquarters were moved to Frisco.

Rodeo is the official sport of Texas; see § Rodeo for more information.

All content from Kiddle encyclopedia articles (including the article images and facts) can be freely used under Attribution-ShareAlike license, unless stated otherwise. Cite this article:
Culture of Texas Facts for Kids. Kiddle Encyclopedia.