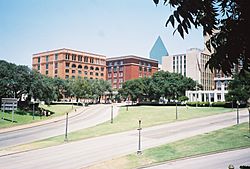 Dealey Plaza with the former Texas School Book Depository Building (left), and the Dal-Tex Building (right) in the background

Dealey Plaza is a district in the West End of downtown Dallas, Texas.

It is known for being the location where the assassination of John F. Kennedy took place on November 22, 1963. The plaza was named as a National Historic Landmark in 1993.

The former Texas School Book Depository building where both the Warren Commission and the House Select Committee on Assassinations concluded that Lee Harvey Oswald shot and killed President John F. Kennedy with a rifle. The plaza also contains a grassy knoll on the northwest side where the House Select Committee on Assassinations determined that there was "...a high probability” that there was a second assassin that also fired at the President, but missed him.

All content from Kiddle encyclopedia articles (including the article images and facts) can be freely used under Attribution-ShareAlike license, unless stated otherwise. Cite this article:
Dealey Plaza Facts for Kids. Kiddle Encyclopedia.