Reunion Tower is a 561 ft (171 m) observation tower in Dallas, Texas and one of the city's most recognizable landmarks. Located at 300 Reunion Boulevard in the Reunion district of downtown Dallas, the tower is part of the Hyatt Regency Hotel complex, and is the city's 15th tallest building. A free-standing structure until the construction of an addition to the Hyatt Regency Dallas in 1998, the tower was designed by architectural firm Welton Becket & Associates.

Reunion Tower, also known locally as "The Ball," was completed on February 2, 1978, along with the Hyatt Regency Dallas at Reunion, as part of an urban redevelopment project that also renovated the historic Union Station, which today services Amtrak, Dallas Area Rapid Transit, and the Trinity Railway Express to Dallas/Fort Worth International Airport and Fort Worth.

When it first opened, the tower included radio station KOAX-FM, now KRLD-FM 105.3 FM, once owned by Westinghouse Broadcasting ("Live twenty-four hours a day from five-hundred feet above the city"). Because it is not used as a broadcast tower, it is not listed in the FCC Database.

Reunion Tower reopened its restaurant level on February 9, 2009, after it was closed for major renovations on November 16, 2007. The observation deck reopened October 5, 2013, just in time for the Tower's 35th anniversary.

The tower is located about 1,000 feet from Dealey Plaza and the site of the assassination of John F. Kennedy.

The tower contains three floors with circular floor plans on top of four shafts of poured-in-place concrete. A central cylindrical shaft houses both stairs and mechanical equipment. Three rectangular shafts, featuring elevators, rise parallel to the central shaft. Each shaft's outfacing wall is made up of glass panels, providing tourists views of the city during the 68-second elevator ride to the top. Before renovations in 2008, the first level housed the observation deck, the second a revolving restaurant called Antares, and the third level a club called The Dome. The top three floors are encased in an open-air sphere, which is a geodesic dome formed with aluminum struts. Every one of the struts' 260 intersections is covered by aluminum circles with lights in the center.

At night, the globe at the building's top is illuminated with 259 custom LED fixtures, manufactured by Altman Lighting and Color Kinetics, a division of Philips Solid State Lighting. Wiedamark, a Dallas-based LED lighting company, led the development, installation and programming of the lights. The original lighting fixtures were conventional incandescent and every unit used 130 watts of electricity. In contrast, the new LED lighting system with all of its color and animation capabilities requires less than 1/5 of the electricity of the old system. Each point on the Reunion Tower is, in fact, using as much electricity as an average nightlight and as much 2 nightlights at its brightest setting. 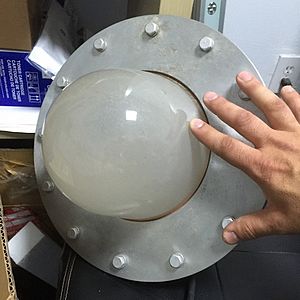 Every fixture has a collaboration of several red, green and blue (RGB) LED lights that are diffused behind a 3/4-inch thick opaque glass cover. While each fixture is very large at nearly 16 inches in diameter, they function in exactly the same way as a pixel on the screen of a cellular phone. By varying the intensity of red, green and blue, the system is able to create every visible color from pinks and purples to white. By moving these colors around the globe at a fluid rate, animations and movement are perceived. All 259 fixtures are controlled by Color Kinetics hardware to execute various computer-generated patterns and colors along the surface of the sphere. The DMX512 lighting protocol is used to communicate with the fixtures. Each fixture is manufactured from solid cast stainless steel and weighs over 20 pounds. Making the tower an iconic landmark on the Dallas skyline, lighting on the globe is also used for special events and holidays across the city (for example, the winter season will feature seasonal colors and animations; for St. Patrick's Day, it will be illuminated in green; for patriotic events, it will be lit in red, white and blue; etc.) The globe was lit up in rainbow colors on June 26, 2015 to celebrate the supreme court ruling which legalized same sex marriage. 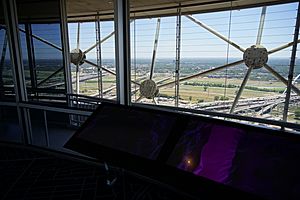 Celebrity chef Wolfgang Puck opened the fine-dining, revolving restaurant, Five Sixty, on the tower's rotating top level on February 11, 2009. The name is a reference to the restaurant's elevation. The middle floor of the tower is used for special events managed by Wolfgang Puck Catering, which is based at nearby Union Station.

The Observation level is called the "GeO-Deck". The interior facility includes an interactive digital experience featuring information about Dallas landmarks, Reunion Tower itself, the events of November 22, 1963, live view high-definition cameras and more. The exterior of the observation deck features telescopes with views in every direction.

The Cloud 9 Cafe is accessible from the observation deck, serving meals and snacks with a 360-degree view from behind glass.

The gift shop at the tower's base features souvenirs related to Reunion Tower, Dallas and Texas and other novelty items.

All content from Kiddle encyclopedia articles (including the article images and facts) can be freely used under Attribution-ShareAlike license, unless stated otherwise. Cite this article:
Reunion Tower Facts for Kids. Kiddle Encyclopedia.