Music of Austin, Texas: Austin's official motto is the "Live Music Capital of the World" because on any given night, one can find over one hundred venues showcasing a wide variety of affordable - or free - live music performances. Austin is also famed for the SXSW and the Austin City Limits (ACL) Music Festivals which showcase an eclectic array of live musical talent from across the globe. The greatest concentration of music venues in Austin are located around 6th Street, the Warehouse District, Downtown, Central East Austin, South Congress, the Red River District, the University of Texas, South Lamar, and South Austin.

The modern definition of "Austin music" emerged in 1972 when "a new form of country music exploded on the scene that turned its back on Nashville and embraced the counterculture.".Eddie Wilson had opened the Armadillo World Headquarters music venue in 1970, which drew large crowds to alternating country and rock music shows. But it was 1972 when a minimally successful Willie Nelson left Nashville once and for all and moved to Austin, joining several other talented nonconformists and recent transplants including Michael (Martin) Murphy, Marcia Ball, Steve Earle, Gary P. Nunn, Jerry Jeff Walker, Ray Wiley Hubbard, Waylon Jennings and others. Willie grew his hair long and "figured out how to bring the hippies and the rednecks together." His audiences at the Armadillo began to cross-pollinate and "what resulted was a scene that no one had ever seen before'....On New Year’s Eve, Austin’s local KOKE.FM radio station switched to a new format geared to the mixed crowds first called “country rock,” and later “progressive country.” By November of that year, the first pilot for the iconic Austin City Limits was being filmed with Willie....Billboard Magazine named KOKE “the most innovative radio station in the country;" and Austin had a national reputation thanks largely to the reporting of Rolling Stone stringer Chet Flippo, who seemed to get a dispatch from the Armadillo into every issue."

Austin became renowned for nurturing talented musicians who didn’t fit the mold anywhere else and were drawn in by the creative vibe, liberal politics, and the low cost-of-living in what was then a laid back Capital city whose largest employers were the University of Texas and State government. Austin's reputation continued to grow and become celebrated for its folk, blues, jazz, bluegrass, tejano, zydeco, new wave, punk, and indie music scenes.

The City also supports two orchestras: the Austin Symphony and Austin Civic Orchestras, as well as the Austin Opera.

A large portion of Austin's early musical heritage began in the German Beer Gardens and Halls in the late 1800s, in places such as Scholz's Garden and Hall (the hall later to become Saengerrunde Hall) and further up the road at Dessau Hall. Dessau Hall peaked in the 1940s and 1950s with acts as diverse as Glenn Miller, Hank Williams, and Elvis Presley. Other major venues for country music included Big Gil's on South Congress and The Skyline on North Lamar. Local singer/yodeler Kenneth Threadgill opened Threadgill's in 1933 on North Lamar, a venue that later hosted Folk/Country jams where Janis Joplin participated in her early days. On the African American East Side of town other music venues such as the Victory Grill, Charlie's Playhouse, Big Mary's, Ernie's Chicken Shack, and Doris Miller Auditorium featured local and touring acts. These destinations, which were part of the "chitlin circuit" featuring big bands, jazz and blues, became famous for later hosting musical legends including Duke Ellington, Ray Charles, Bobby Bland, B.B. King, Ike Turner and Tina Turner.

In 1964, the Broken Spoke, opened featuring country acts such as Bob Wills, Ernest Tubb, and the young Willie Nelson. The late-1960s and 1970s saw the country music popularized by Willie Nelson and others being joined by a host of other music brought by the more liberal inhabitants, who migrated to Austin during these two decades. Specifically, Roky Erickson and his 13th Floor Elevators helped bring in this psychedelic era.

Austin was home to the Vulcan Gas Company that featured headliners such as the 13th Floor Elevators, (Johnny and Edgar) Winter brothers, and Shiva's Headband. The Vulcan morphed into the Armadillo World Headquarters in 1970 and for more than ten years featured music of all genres, from Bruce Springsteen to Bette Midler, as well as local ballet, blues and jazz. The artwork from this establishment was a part of the Austin scene and the Armadillo became the Austin city animal. Songs such as Gary P. Nunn's "London Homesick Blues" (which includes in the chorus "I want to go home with the armadillo") made this a staple of Austin. The artist who began the Armadillo logo was Jim Franklin, who is still working today. 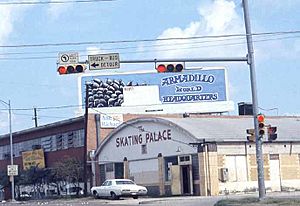 The Armadillo World Headquarters in 1976.

In the following years, Austin gained a reputation as a place where struggling musicians could launch their careers in front of receptive audiences, at informal live venues. A major influence during this time was Clifford Antone and the namesake blues club he founded in 1975, at the age of 25. Antone's located on Austin's 6th Street fostered the careers of a number of musicians, including Stevie Ray Vaughan. Liberty Lunch was a live-music venue in Austin and during its heyday in the late 1970s and 1980s featured all kinds of music, including reggae and ska, punk, indie, country and rock. The venue was forced to close to make way for Austin's downtown redevelopment in the late 1990s. Since then, Liberty Lunch has attained a legendary status in the history of Austin music. Now-defunct Armadillo World Headquarters has attained a similar status. Austin's live music scene has experienced a resurgence in the past few years after losing some of its best loved venues (Liberty Lunch, Armadillo and others), a host of new clubs have risen up to continue Austin's rich live music heritage. Places such as the Skylark Lounge, Stubb's, Ginny's Little Longhorn, and a list of others have become a stalwart of a new generation of live music stages throughout the city.

The punk/new wave era in Austin began in earnest in 1978. The Club Foot played an important role in hosting many of the local punk/new wave acts. The city's first two rock/new wave bands, the Skunks and the Violators, made their debut at a University-area club called Raul's in February. The explosive show by the Sex Pistols in San Antonio the previous month helped build toward an excited reception for local purveyors of the style. The Skunks' lineup consisted of Jesse Sublett on bass and vocals, Eddie Munoz on guitar and Bill Blackmon on drums. The Violators featured Kathy Valentine (later of The Go-Go's), Carla Olson (later of the Textones), Marilyn Dean and Sublett on bass. The Violators were short-lived, as all the members except for Sublett moved to LA the following year. Margaret Moser, of the Austin Chronicle, later wrote that "The Skunks put Austin on the rock n' roll map." Another influential band that led the punk scene in Austin was the Big Boys.

Austin became one of the important stops on every tour of important punk/new wave acts. Many of these bands, such as the Police, Joe Jackson, Blondie and Talking Heads, played at the Armadillo. A number of them, including the Clash, Elvis Costello and Blondie, would make appearances at gigs by the Skunks and take the opportunity to jam with the band.

The 1980s and 1990s also helped shape Austin's music scene. Waterloo Records, which has been voted the best independent record store in the country and hosts live in-store shows, first opened in 1982. Austinite Stevie Ray Vaughan won a Grammy in 1990 for best contemporary blues album. After tragically dying in a helicopter crash, he was memorialized with a statue on the shores of Austin's Lady Bird Lake. Additionally in 1991, Austin city leaders named Austin, "The Live Music Capital of the World", because of the number of live music venues.

Visitors and Austinites alike may notice the 10-foot guitars standing on the sides of the city's streets. In 2006, Gibson Guitar brought Guitar Town to Austin, placing 35 of these giant guitars around the city.

The Austin Music Foundation is one of several Austin groups that help independent artists further their music careers. Assisting musicians with medical needs are the Simms Foundation and Health Alliance for Austin Musicians (HAAM). Promotion, preservation and education is the mission of the Austin Blues Society, formed in 2006 by Kaz Kazanoff and other blues community notables. Helping to promote the $1 billion music industry in the city is the Austin Music Office. A department of the Austin Convention & Visitors Bureau, the Austin Music Office offers creative, personalized assistance in booking live music, discounted Austin Compilation CDs and mini-guides to the city's live music scene, assistance with utilization of live music venues for off-site events, and guidance with local music attractions and creation of music tours.

Austin's most well-known styles are varieties of country music. In the 1970s the "progressive country" and "cosmic cowboy" movements were established.

There is also a history of Blues music, which developed by the 1950s in the "Negro district" of East Austin; it was one of several places on the "Chitlin’ Circuit". One of the earliest venues which used desegregation was Charlie’s Playhouse in East Austin, and further desegregation occurred there as time passed. Barry Shank, a cultural scholar, stated that the white and black Blue's scenes in Austin remained distinct but that the black one influenced the white one. By 2012 the blues culture became racially integrated, spread outwards from East Austin, and decreased in size. 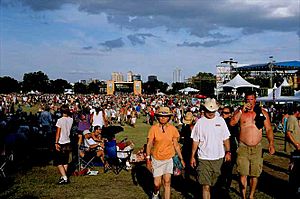 Austin City Limits Music Festival with view of stages and the Austin skyline.

Austin is the home of South by Southwest (SXSW), an annual film, music and interactive conference and festival, and the expanding number of fringe events that take place during the festival, at venues all over town. In the fall, Austin hosts the Austin City Limits Music Festival (ACL) and the Fun Fun Fun Fest. In the spring, the long-running Old Settler's Music Festival takes place at the Salt Lick Pavilion & Camp Ben McCulloch just outside the city. Every summer, local businesses put on a series of free blues shows in Zilker Park entitled "Blues on the Green." Numerous other music festivals occur year-round. Other annual festivals include the "Keep Austin Weird Festival" and the Heart of Texas Quadruple Bypass Music Festival a.k.a. The Texas Rockfest.

Austin is home to other large annual festivals including:

The Austin Chronicle, Austin Convention & Visitors Bureau, Do512, and Phosphene Productions offer information on the most common venues that host local bands.

In addition to the usual restaurant/bar venues listed above, Austin offers live music in unexpected places as well. These unique venues include: 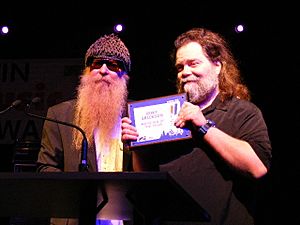 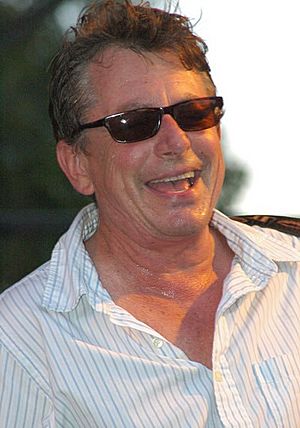 Joe Ely in concert at the Blues On the Green music series, 2006.

Musicians who previously contributed to the Austin music scene (including those who died, have broken up, or moved from the city):

The Austin Music Memorial at the Joe and Teresa Long Center honors those who have contributed to the development of the Austin music community.

All content from Kiddle encyclopedia articles (including the article images and facts) can be freely used under Attribution-ShareAlike license, unless stated otherwise. Cite this article:
Music of Austin, Texas Facts for Kids. Kiddle Encyclopedia.