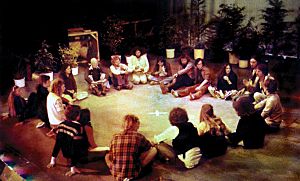 A counterculture (also written counter-culture) is a subculture whose values and norms of behavior differ substantially from those of mainstream society, often in opposition to mainstream cultural mores.

All content from Kiddle encyclopedia articles (including the article images and facts) can be freely used under Attribution-ShareAlike license, unless stated otherwise. Cite this article:
Counterculture Facts for Kids. Kiddle Encyclopedia.