Douglas Wayne Sahm (November 6, 1941 – November 18, 1999), was an American musician. He was born in San Antonio, Texas. He was a child prodigy in country music. He later became best known in roots rock, tejano music, Americana and other genres.

He was the lead singer of a popular 1960s rock and roll band, the Sir Douglas Quintet. He later formed a Tex Mex band with Augie Meyers, Freddy Fender and Flaco Jimenez.

Sahm started his musical career singing and playing steel guitar, mandolin and violin. He first sang on the radio at age five. He recorded his first song, "A Real American Joe", at age eleven. On December 19, 1952, when he was eleven, he played on stage with Hank Williams Sr. at the Skyline Club in Austin, Texas. It was Hank Williams's last time playing. He died on New Year's Day of 1953. He died of heart failure while on the road to his next show in Canton, Ohio.

When he was thirteen, Sahm was invited to join the Grand Ole Opry, but his mother wanted him to finish junior high school. When he was a teenager, he started sneaking into San Antonio rhythm and blues bars to play music. 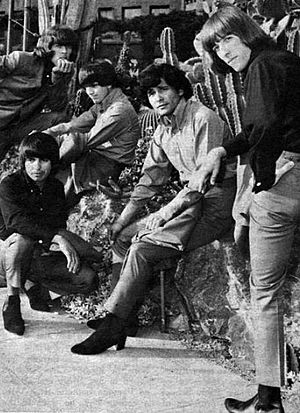 In 1965, Sahm formed the band, Sir Douglas Quintet, with a childhood friend, Augie Meyers. A record producer picked the band's name so they would seem British. At the time, music from Britain was so popular in the United States, it had a name: "British invasion". The British name only helped a little. Sahm had a Texas accent and two band members were Hispanic. Some early photographs of the band tried to hide this from music fans.

The band had a Top Twenty US hit with "She's About a Mover". It also made the Top Twenty in the UK Singles Chart.

Bob Dylan liked the group's sound and said: "Look, for me right now there are three groups: Butterfield Blues Band, The Byrds and the Sir Douglas Quintet." 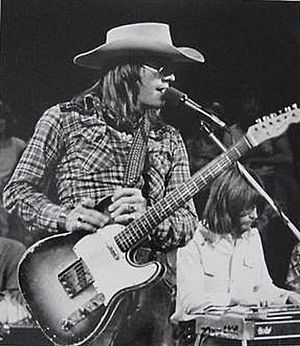 Performing on Austin City Limits in 1976

After the breakup, Sahm moved to San Francisco to begin a blues band. Later, he and Augie Meyers got back together as Sir Douglas Quintet, with new members. They recorded a successful album and single, both named Mendocino.

In 1973, Jerry Wexler of Atlantic Records produced Sahm's first solo album, Doug Sahm and Band. Bob Dylan, Dr. John and Flaco Jiménez also played on the album. Wexler said: "Then in October 1972, Dylan was in the studio with Doug Sahm... Dylan having been friendly with Sahm since the mid-sixties and having expressed enthusiasm for the Sir Douglas Quintet on more than one occasion".

Sahm also played on recordings by other artists during this time, including The Grateful Dead and Willie Nelson.

In 1989, Sahm started the Tex-Mex supergroup, the Texas Tornados, with Freddy Fender, Augie Meyers, and Flaco Jimenez. They recorded seven albums. These included two live ones, and a "Best of" collection. Their first album won a Grammy for Best Mexican-American Performance for their song "Soy de San Luis", in 1991.

Sahm played on the 1993 Uncle Tupelo album Anodyne, on the song "Give Back the Key to my Heart". He also recorded a Grammy-winning solo album, The Last Real Texas Blues Band, in 1994.

Sahm died of a myocardial infarction while asleep in a motel room in Taos, New Mexico, on November 18, 1999. He is buried in Sunset Memorial Park in San Antonio.

A posthumous album, The Return of Wayne Douglas, was released in 2000. Sahm's son, Shawn, leads his own Tex Mex band. They were on the cover of Rolling Stone in 1968, as father and son. Doug Sahm's other son, Shandon Sahm, is the drummer for the Meat Puppets as of 2010.

Sahm has been named into in the South Texas Music Walk of Fame. In 2008, he was inducted into the Austin Music Memorial, in the first group. He also was given the Americana Music Association (AMA)'s Presidents Award in 2002.

In 2008, Austin, Texas approved the naming of Doug Sahm Hill, in a park near Lady Bird Lake, to honor him.

A documentary movie, Sir Doug & the Genuine Texas Cosmic Groove, premiered at South by Southwest (SXSW) music festival. This was in Austin, Texas on March 19, 2015.

All content from Kiddle encyclopedia articles (including the article images and facts) can be freely used under Attribution-ShareAlike license, unless stated otherwise. Cite this article:
Doug Sahm Facts for Kids. Kiddle Encyclopedia.