The Avalon Ballroom was a music venue in the Polk Gulch neighborhood of San Francisco, California, at 1244 Sutter Street (or 1268 Sutter, depending on the entrance). The space operated from 1966 to 1969, at the height of the counterculture movement. It also had a reopening 34 years later, from 2003 to 2005. 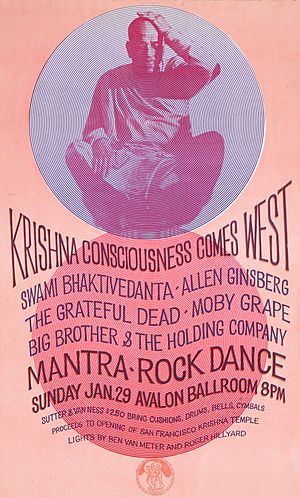 The building that housed the Avalon Ballroom was built in 1911 and was originally called the Colin Traver Academy of Dance.

The Avalon Ballroom was founded by Robert E. Cohen, impresario Chet Helms and his music production company, Family Dog Productions, which had offices on Van Ness. Bands were frequently booked to perform at the Avalon on Thursday, Friday and Saturday. Extraordinary posters advertising each event were produced by psychedelic artists, including Rick Griffin, Stanley Mouse, Alton Kelley and Victor Moscoso.

In the 1960s, at the Avalon, two bands typically performed two sets during the evening beginning at about nine o'clock. Many local bands, such as Quicksilver Messenger Service and the Steve Miller Band, served as backup bands, as did the early Moby Grape and headliners such as The Doors, the 13th Floor Elevators, the Butterfield Blues Band and Big Brother and the Holding Company, which Helms organized around singer and performer Janis Joplin in spring 1966.

The Grateful Dead played at the Avalon twenty-nine times from 1966 through 1969, and recorded two live albums, entitled Vintage Dead and Historic Dead, in the autumn of 1966. 2 tracks of their famous "Live/Dead" album were also recorded there in early 1969, The Eleven and Turn On Your Love Light.

On January 29, 1967, it hosted the Mantra-Rock Dance musical event, organized by the local Hare Krishna temple, which featured Hare Krishna founder Bhaktivedanta Swami, along with Allen Ginsberg, The Grateful Dead, Moby Grape and Big Brother and the Holding Company, with Janis Joplin.

The Avalon Ballroom occupied the two top floors of the multi-story building at 1268 Sutter. An L-shaped, second-floor balcony surrounded the first-floor along the south and western walls, and the dance area was in front of the elevated stage in the northeast corner where musicians performed. The entrance doors were downstairs, and opened onto Sutter Street.

The Family Dog on the Great Highway, at 2125 Pine Street was a hippie commune, which hosted dances and events, eight blocks from the Avalon, frequented by Helms and his friends. The Avalon was not as large as the Winterland Ballroom or The Fillmore, which had been used by Helms before Bill Graham allegedly violated their partnership agreements. However, the Avalon had the capacity of up to 500. The ballroom was 80 to 100 ft (24 to 30 m) by 160 to 180 feet (49 to 55 m). This area included the stage, which was 40 to 50 feet (12 to 15 m) wide. The dance floor could accommodate several hundred dancers. An omnipresent light show was created by several local lighting companies.

The Avalon Ballroom lost its lease in November 1968; Cohen and Helms moved on to other pursuits – Helms became an art dealer, while still occasionally producing concerts. Cohen went on to form the national touring audio company, Bob Cohen Sound, that would tour with many former Avalon acts, and later founded Clearcom Intercom Systems.

In 2002, after learning from famous psychedelic poster artist Stanley Mouse that the building was available, neo-hippie Steve Shirley (aka Morning Spring Rain) of the Hog Farm commune and backed by partner Michael Lazar (owner of Shadow Lounge), partner Michael Conner and Brian Lucas (aka Moffett aka Chef BeLive), who was given a partnership for dedicating so much time and resources to get the venue up and running by orchestrating most of the volunteers, bringing early acts and many of the first concert goers; together they restored and re-opened the Avalon Ballroom 34 years after it had been closed. They created a delightful space that acts like George Clinton and P-Funk, Robert Hunter, Arlo Guthrie, Spearhead and many others played there. Original Family Dog founder and Avalon Ballroom owner Chet Helms is said to have enjoyed many good times at the reopening before his death. The venue Produced 70 plus concerts between 2003 and 2005. The former Avalon Ballroom was later used as the offices for fabric design company American Pacific Linens. In 2012 it became the headquarters of the internet company Wantful.com. The entire former ballroom space was renovated. Starting in August 2013, the building was used as the residence and principal filming location for The Real World: San Francisco (2014).

"Combination Of The Two", the opening song of Cheap Thrills, the second album by the Big Brother and The Holding Company, was a homage to the rock ballrooms of San Francisco, and there is a direct reference to the Avalon in the lyrics: "Everybody over at the Avalon Ballroom in the San Francisco Bay". According to Sam Andrew in the documentary Nine Hundred Nights, he wrote Combination of The Two for the San Francisco late 60s scene, and "The Two" were The Fillmore and The Avalon.

All content from Kiddle encyclopedia articles (including the article images and facts) can be freely used under Attribution-ShareAlike license, unless stated otherwise. Cite this article:
Avalon Ballroom Facts for Kids. Kiddle Encyclopedia.