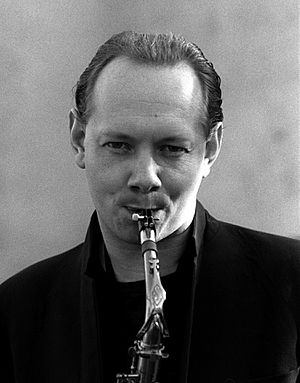 David Ian "Joe" Jackson (born 11 August 1954) is an English musician and singer-songwriter. Jackson's first and second releases, "Sunday Papers" and "Is She Really Going Out With Him?" became a hit in 1979. This was followed by many new wave singles before he started creating more jazz type pop music. He had a Top 10 hit in 1982 with "Steppin' Out". He has also composed classical music. He has recorded 19 studio albums and earned 5 Grammy Award nominations in a career extending from 1978 to today.

All content from Kiddle encyclopedia articles (including the article images and facts) can be freely used under Attribution-ShareAlike license, unless stated otherwise. Cite this article:
Joe Jackson (musician) Facts for Kids. Kiddle Encyclopedia.