Kreuzberg is a district of Berlin, Germany. It is part of the Friedrichshain-Kreuzberg borough located south of Mitte. Kreuzberg is bounded by the river Spree in the east. The Landwehrkanal flows through Kreuzberg from east to west, with the Paul-Lincke-Ufer running alongside it. Other characteristics are the old U-Bahn line of the present-day U1, the Görlitzer Park in SO 36 and the Viktoriapark on the slope of the Kreuzberg hill in SW 61.

During the Cold War era, it was one of the poorest areas of West Berlin, but since German reunification in 1990 it has improved and is known for its arts scene.

The borough is known for its very large percentage of immigrants and descendants of immigrants, many of whom are of Turkish ancestry. While Kreuzberg thrives on its diverse culture and is still an attractive area for many, the district is also characterized by high levels of unemployment and some of the lowest average incomes in Berlin. 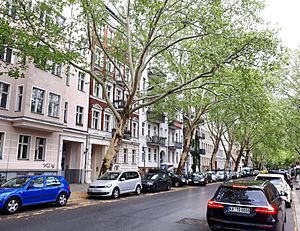 A street in Kreuzberg

In contrast to many other areas of Berlin, which were villages before their integration into Berlin, Kreuzberg has a rather short history. It was formed on 1 October 1920 by the Greater Berlin Act providing for the incorporation of suburbs and the reorganisation of Berlin into twenty boroughs. Kreuzberg, literally meaning cross hill, is the point of highest elevation in the Kreuzberg locality, which is 66 m (217 ft) above sea level. The hill is traditionally a place for weekend trips. 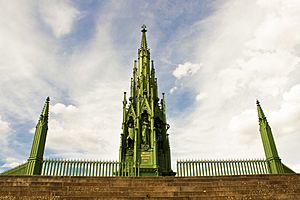 It received its name from the 1821 Prussian National Monument for the Liberation Wars by Karl Friedrich Schinkel within the Viktoriapark, built in commemoration of the Napoleonic Wars. Except for its northernmost part, the quarter Friedrichstadt (established in the end of the 17th century), today's "Kreuzberg" was a very rural place until well into the 19th century.

This changed when, in the 1860s, industrialization caused Berlin to grow rapidly. Many of Kreuzberg's buildings originate from that time. They were built on the streets laid out in the Hobrecht-Plan in an area that came to be known architecturally as the Wilhelmine Ring. 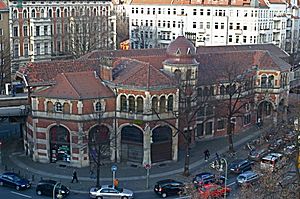 In addition to housing, Kreuzberg was also one center of Berlin's industry. The "export quarter" along Ritter Street consisted of many small businesses, and the "press quarter" along Koch Street (Friedrichstadt) was the home of most of Germany's large newspapers, as well as book publishers. 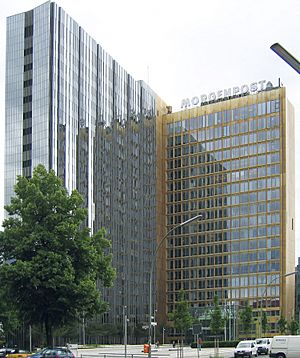 Side view of the Axel-Springer-Haus (Axel Springer building)

Both of these industrial quarters were almost entirely destroyed by air raids during World War II, with the bombings of a single night from February 3, 1945. In remembrance of the old tradition, the Axel Springer press company erected its German headquarters at Kochstraße again, right next to the Berlin Wall.

After World War II, Kreuzberg's housing rents were regulated by law which made investments unattractive. As a result, housing was of low quality, but cheap, which made the borough a prime target for immigrants coming to Germany (and Berlin). 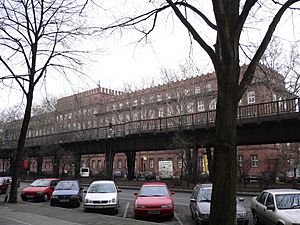 Starting in the late 1960s, increasing numbers of students, artists, and immigrants began moving to Kreuzberg. Enclosed by the Berlin Wall on three sides, the area became famous for its alternative lifestyle and its squatters, especially the SO 36 part of Kreuzberg. Starting in 1987, there have been violent riots in SO 36 on Labour day.

After the fall of the Berlin Wall, Kreuzberg suddenly found itself in the middle of the city again. The initially cheap rents and high degree of 19th century housing made some parts of the borough more attractive as a residential area for a much wider (and richer) variety of people. Today, Kreuzberg has one of the youngest populations of all European city boroughs. 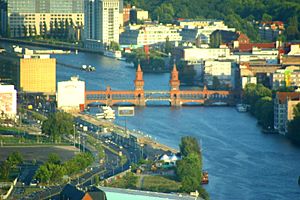 Berlin's 2001 administrative reform combined Kreuzberg with Friedrichshain to form the new borough of Friedrichshain-Kreuzberg. Since the two areas are linked only by a single bridge over the Spree River, the Oberbaumbrücke, the two areas could not agree on a common location for the future borough's city hall, the present location in Friedrichshain was decided by flipping a five-Mark coin. 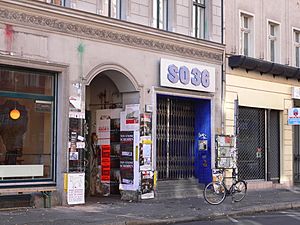 Kreuzberg has historically been home to Berlin's punk rock movement as well as other alternative subcultures in Germany. The SO36 club remains a fixture on the Berlin music scene. It was originally focused on punk music and in the 1970s was often frequented by Iggy Pop and David Bowie. In those days the club rivalled New York's CBGB as one of the finest new-wave venues in the world.

There has also been a significant influence stemming from African-American and hip hop culture on Kreuzberg's youth and the area has become a centre for rap and breakdance within Berlin. Though the majority of Kreuzberg's residents are of German or Turkish descent, some identify more with American or African-American culture. Hip hop was largely introduced to the youth of Kreuzberg by the children of American servicemen who were stationed nearby until the reunification of Germany. 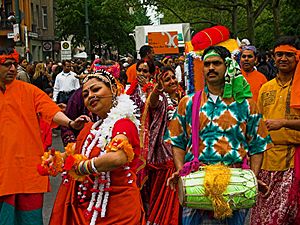 The Carnival of Cultures, a large annual festival, celebrates different cultures and heritages with colourful street parades and festivities including street entertainment, food, arts and craft stalls, music and art.

Kreuzberg has long been the epicenter of LGBTQ life and arts in Berlin. Kreuzberg is home to the Schwules Museum, established in the 1980s and dedicated to preserving, exhibiting, and discovering queer history, art and culture.

All content from Kiddle encyclopedia articles (including the article images and facts) can be freely used under Attribution-ShareAlike license, unless stated otherwise. Cite this article:
Kreuzberg Facts for Kids. Kiddle Encyclopedia.