The Spree is a river that flows through the Saxony, Brandenburg and Berlin states of Germany, and in the Ústí nad Labem region of the Czech Republic. Approximately 400 kilometres (250 mi) in length, it is a left bank tributary of the River Havel, which itself flows into the Elbe and then the North Sea. It is the river on which the original centre of Berlin was built.

The reach of the river between the Dämeritzsee and Müggelsee to the east of Berlin is known as the Müggelspree (). 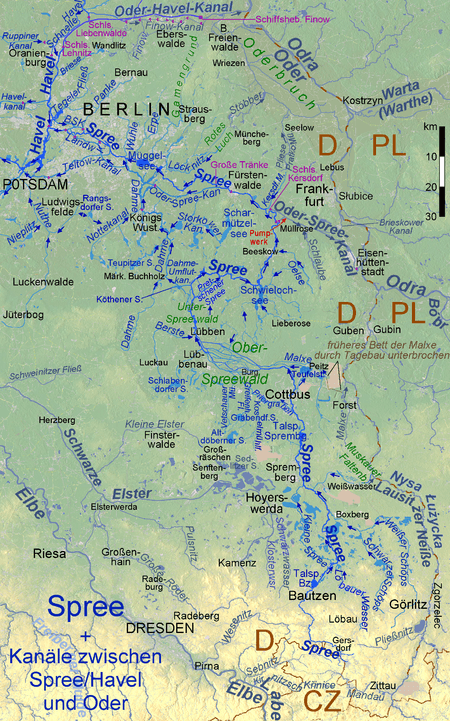 Course of Spree River with its natural and artificial affluents and branches. in addition the canals joining the Spree & Havel river system to Oder River

The source of the Spree is a small pond in the Lusatian Highlands near the Czech border. The Spree runs on the border for a short distance at two points (near Ebersbach and Oppach) before leaving the hills and passing through Bautzen/Budyšin in Upper Lusatia. Just to the north of Bautzen the river flows through the Bautzen Reservoir. Further north the river passes through the city of Spremberg before reaching the city of Cottbus. To the north of Cottbus the river enters the Spreewald, a large wetlands area in Lower Lusatia.

In the Spreewald the river passes through the towns of Lübbenau, Lübben and Leibsch. Just below Leibsch, the Dahme Flood Relief Canal diverts water from the Spree to run into the River Dahme at Märkisch Buchholz. The Spree continues north from Leibsch before flowing into the Neuendorfer See at the northern edge of the Spreewald. From the Neundorfer See it then flows in an easterly direction to the Schwielochsee, and then in a northerly and westerly direction to the town of Fürstenwalde. From Fürstenwalde the river continues to flow westwards, through the Dämeritzsee and Müggelsee, to Köpenick in the southeastern part of Berlin, where it is joined by its tributary, the River Dahme.

The final reach of the Spree is where it is best known. It flows through the city centre of Berlin to join the River Havel in Spandau, one of Berlin’s western boroughs, which itself ultimately merges with the Elbe to enter the sea in Cuxhaven, after flowing through Hamburg. On its route through Berlin, the river passes Berlin Cathedral (Berliner Dom), the Reichstag and the Schloss Charlottenburg. The renowned Museum Island (Museumsinsel), with its collection of five major museums, is an island in the Spree.

In 2004 the Badeschiff floating swimming pool opened on the Spree in Berlin.

Small craft, such as punts, are widely used in wetlands of the Spreewald. Larger craft can reach as far upstream as Leibsch, although the upper reaches are relatively shallow and are generally only used by leisure craft. Some intermediate reaches are unnavigable and by-passed by canals.

For a stretch of about 20 kilometres (12 mi) east of and flowing through Fürstenwalde, the river forms part of the Oder-Spree Canal. On this reach, and on the reach west of the confluence with the River Dahme at Köpenick, the river forms part of secondary commercially link between Berlin and the River Oder and hence Poland. The canal diverges from the Spree just east of Fürstenwalde and later joins the River Dahme at the (lake) Seddinsee.

In Berlin, the Spree forms part of a dense network of navigable waterways, many of which are artificial, and which provide a wide choice of routes. Several important commercial harbours can be found on this network, and tugs and barges move sand, grain, bricks, and beer. Tour boats tour the central section of the Spree and its adjoining waterways on a frequent basis.

All content from Kiddle encyclopedia articles (including the article images and facts) can be freely used under Attribution-ShareAlike license, unless stated otherwise. Cite this article:
Spree Facts for Kids. Kiddle Encyclopedia.