Köpenick is a historic town that is situated at the confluence of the rivers Dahme and Spree in the south-east of the German capital city of Berlin.

It was formerly known as Copanic and then Cöpenick, only officially adopting the current spelling in 1931. It is known for the famous imposter Hauptmann von Köpenick.

Prior to its incorporation into Berlin in 1920, Köpenick was an independent town. It then became a borough of Berlin, with an area of 128 km2 (49 sq mi), making it Berlin's largest borough. 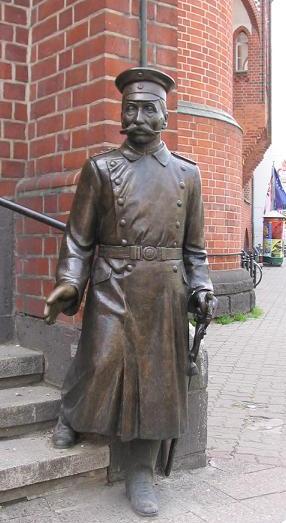 A large percentage of Köpenick's area is covered with forests and water, most notably the Müggelsee lake. The historic town lies in the centre of the Berlin Urstromtal meltwater valley at the confluence of the rivers Dahme and Spree. Shortly before its conflux with the Spree, the Schlossinsel lies on the Dahme, a small island with Köpenick Castle.

The Spree connects Köpenick with the Müggelsee and the Berlin city centre. The Oder–Spree Canal links the Dahme, at nearby Schmöckwitz, with the Oder river, at Eisenhüttenstadt, thus providing a navigable connection between Köpenick and the Oder.

Köpenick is sometimes called the "green lungs" of Berlin. The Müggelberge hills in the south-east of Köpenick reach 115 m (377 ft), making them the highest natural point of Berlin.

In 1631, during the Thirty Years' War, the emissaries of George William, Elector of Brandenburg went to Köpenick to meet the approaching army of Gustav Adolph, King of Sweden, to try to stop the devastation of Brandenburg.

In 1906, a shoemaker called Wilhelm Voigt pretended to be a Prussian officer and took over the town hall of Köpenick. A play was made about the event, and later several films and television shows.

All content from Kiddle encyclopedia articles (including the article images and facts) can be freely used under Attribution-ShareAlike license, unless stated otherwise. Cite this article:
Köpenick Facts for Kids. Kiddle Encyclopedia.