Bautzen (, Upper Sorbian: Budyšin, Lower Sorbian: Budyšyn Polish: Budziszyn) is a city in eastern Saxony, Germany, and capital of the Bautzen Rural District. It is on the Spree River.

Bautzen is historical capital of Upper Lusatia, and it is the most important cultural centre of the Sorbs, a Slavic minority.

During World War II and the Nazi era, there was a subcamp of the Groß-Rosen concentration camp in Bautzen. Ernst Thälmann was imprisoned there before being deported to Buchenwald.

After the war Bautzen was well known in the German Democratic Republic because of its prison. Bautzen I was used as an official prison, Bautzen II was a secret prison for prisoners of conscience (people arrested for their political beliefs, not because of an ordinary crime). Bautzen I is still used as a prison, and Bautzen II has been a memorial since 1993.

In 2002 the city commemorated its thousandth birthday. 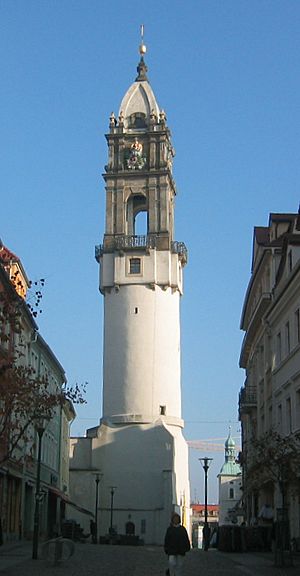 All content from Kiddle encyclopedia articles (including the article images and facts) can be freely used under Attribution-ShareAlike license, unless stated otherwise. Cite this article:
Bautzen Facts for Kids. Kiddle Encyclopedia.