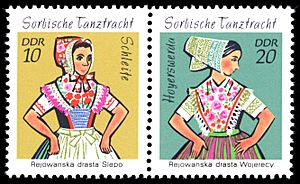 The Sorbs are Slavic people. They live mostly in Germany and Poland. There are 60,000 Sorbian people in the world. About 25,000 people speak one of the Sorbian languages.

All content from Kiddle encyclopedia articles (including the article images and facts) can be freely used under Attribution-ShareAlike license, unless stated otherwise. Cite this article:
Sorbs Facts for Kids. Kiddle Encyclopedia.