The Sorbian languages are a Slavic branch of the Indo-European languages.

They are the native languages of the Sorbs, a Slavic minority in eastern Germany. Historically the language has also been known as Wendish or Lusatian.

In Germany, Upper and Lower Sorbian are officially recognized and protected as minority languages by the European Charter for Regional or Minority Languages. In the home areas of the Sorbs, both languages are officially equal to German. 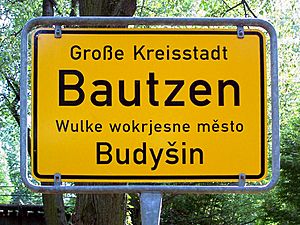 The city of Bautzen in Upper Lusatia is the centre of Upper Sorbian culture. Bilingual signs can be seen around the city, including the name of the city, "Bautzen/Budyšin".

The city of Cottbus (Chóśebuz) is considered the cultural centre of Lower Sorbian. Cottbuss also has bilingual signs.

Sorbian is also spoken in the small Sorbian (“Wendish”) settlement of Serbin in Lee County, Texas. Until recently newspapers were published in Sorbian there. The local dialect has been heavily influenced by surrounding speakers of German and English.

American and Australian communities often prefer to call themselves “Wends” or “Wendish,”. They think that “Sorb” and “Sorbian” are bad words.

All content from Kiddle encyclopedia articles (including the article images and facts) can be freely used under Attribution-ShareAlike license, unless stated otherwise. Cite this article:
Sorbian languages Facts for Kids. Kiddle Encyclopedia.