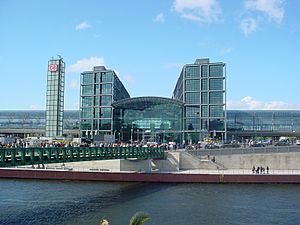 Berlin Hauptbahnhof (English: Berlin Central Station) is the central railway station of the German capital Berlin. It began full operation two days after a ceremonial opening on 26 May 2006.

It is on the site of the old Lehrter Bahnhof. Until it opened as a main line station, it was a stop on the Berlin S-Bahn suburban railway, temporarily named Berlin Hauptbahnhof - Lehrter Bahnhof in 2002.

The longest route that runs through Berlin Central railway station is the Sibirjak. It links Berlin to some cities in Russia. It passes through Poland, Belarus, Russia and Kazakhstan. The longest route offered goes to Novosibirsk. This takes almost four days to travel.

All content from Kiddle encyclopedia articles (including the article images and facts) can be freely used under Attribution-ShareAlike license, unless stated otherwise. Cite this article:
Berlin Hauptbahnhof Facts for Kids. Kiddle Encyclopedia.