Big Tex is a 55-foot (17 m) tall figure and marketing icon of the annual State Fair of Texas held at Fair Park in Dallas, Texas. The figure has become a cultural icon of Dallas and Texas. Since 1952 Big Tex has served as a cultural ambassador to visitors, and the figures prime location in the fairgrounds serves as a traditional meeting point.

On October 19, 2012, the last weekend of the 2012 State Fair of Texas, Big Tex was destroyed by an electrical fire that started in the right boot and worked its way up the structure, first becoming visible from the neck area. After the fire, a new Big Tex was created by SRO Associates and Texas Scenic Co. This rendition made its first public appearance on September 26, 2013.

Big Tex donned a mask in September 2020 while the fair was on hiatus because of the COVID-19 pandemic. 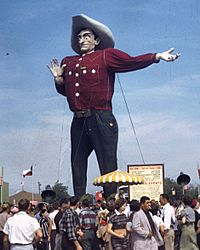 Kerens, Texas is known as the "Birthplace of Big Tex", although his original incarnation was as a 49-foot (15 m) tall Santa Claus constructed from iron drill casing, papier mache, and unraveled rope in 1949. The statue was an idea of Howell Brister, manager of the Chamber of Commerce, to encourage holiday sales in the town, and the "World's Largest Santa Claus" (a claim later disputed) stood over Colket Avenue for two holiday seasons — drawing press attention from as far away as Iran and Australia. Modeled after Kerens residents Ottis Franklin Spurlock and Hardy Mayo, the figure was built by members of the community who welded the frame, fabricated the body and sewed the clothing.

After two seasons the excitement over the statue faded, and Kerens offered it up for sale. In 1951, State Fair president R. L. Thornton purchased Santa's components for $750 and had artist Jack Bridges transform them into a cowboy, giving birth to "Big Tex".

Big Tex made his debut at the 1952 fair, a 52-foot cowboy dressed in denim jeans and a plaid shirt donated by the H. D. Lee Company, then based in Shawnee Mission, Kansas. Artist Jack Bridges used a photograph of his own face, a photograph of rancher Doc Simmons and a photograph of Will Rogers to create the new look. After the fair, his appearance was slightly altered to straighten his nose and correct an odd wink. It was in 1953 that Big Tex also began speaking. Using a custom-built recipromotor and a 75-watt speaker system housed in the figure's head, Jack Bridges devised a way to create the illusion of natural speech with a swinging jaw. Tex also attended a convention in Minneapolis that year with the Dallas Jaycees.

In 1955 Big Tex received his first new change of clothes, again fabricated by the H. D. Lee Company. After that year's fair, he traveled to West Texas to participate in Abilene Christian College's 50th annual homecoming celebration. A 12-foot-tall, 19-foot long plastic model of a Hereford steer (called "The Champ") accompanied Big Tex for the 1956 fair, but Big Tex was primarily displayed alone. During the 1950s Big Tex underwent further re-design, replacing the papier mache "skin" with fiberglass. The original head was put into storage and later sold at auction in 1993 to a Dallas collector. 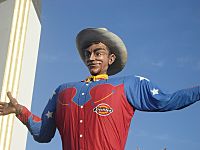 The State Fair of Texas announced the construction of a permanent, year-round statue of Big Tex in 1961, but the figure remained a seasonal feature appearing only during the fair. Instead, the Big Tex Circle display area was redesigned in 1966 with a larger mound.

Big Tex traveled to his hometown of Kerens, Texas in 1981 to help celebrate the 100th anniversary of the city. The figure continued to travel to various promotional events until the mid-1980s.

In 1997, Big Tex was given a skeletal makeover consisting of 4,200 feet of steel rods weighing 6,000 pounds. The new skeleton adjusted the posture and allowed for a new hand that waved to passersby, but kept the original head. Three years later his neck was animated, allowing it to turn; his mechanical mouth was also upgraded with a new system.

Big Tex celebrated his 50th birthday in 2002, receiving a giant birthday cake and an AARP card. Shades of gray were added to the hair and wrinkles were added the figure's hands and face as Big Tex continued to "age". In 2012 the State Fair of Texas celebrated Big Tex's 60th birthday. 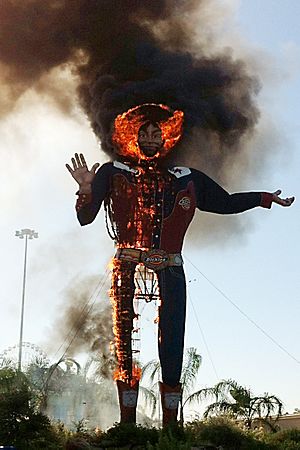 On the morning of October 19, 2012, (the final weekend of the 2012 State Fair of Texas, and on Big Tex's 60th birthday) a fire started inside the framework of Big Tex. The figure's clothing, face and hat were completely destroyed in minutes as onlookers watched. An official investigation determined that the fire started in an electrical panel (fixed wiring) under the attraction's right boot. This panel was believed to have powered the air compressor that kept the clothing of the statue 'inflated'.

News of the fire received national attention, and fair officials committed to rebuilding Big Tex "bigger and better" in time for the 2013 fair.

Big Tex generally receives a new shirt and jeans triennially, currently designed and fabricated by the Williamson-Dickie Manufacturing Company. His clothes will next be replaced in 2022.

Prior to 2013, Big Tex wore size 70 boots, a 75-gallon hat, a size 100 180/181 shirt made from nylon awning fabric and 284W/185L 5X pair of Dickies jeans. The pants alone required 72 yards (66 m) of denim and weigh in at 65 pounds (29 kg). Over the years the outfit was accessorized with other articles associated with that year's State Fair of Texas theme. Big Tex has suffered a few garment mishaps over the years. In 1961, Hurricane Carla's winds tore his clothes. In 1970, his huge shirt was stolen from a pickup truck and received much publicity.

Big Tex welcomes fairgoers with his friendly drawl of "HOOOOOOWDEEEEE, FOOOOOOLKS!!!" and makes regular announcements throughout the duration of the State Fair of Texas. His booming voice has been played by only a few men over six decades, who perform every day of the fair from a booth known as the "doghouse". 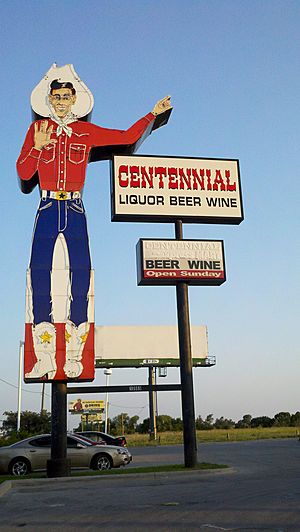 Al Jones, a disc jockey for WRR FM 101.1, was the first voice of Big Tex. Al spoke for Big Tex for three years. Radio announcer Jim Lowe, the most well-known voice of Big Tex, performed for 39 continuous years until 1998. Dan Alexander stepped up for the next two years. In 2001 a statewide competition and contest, held live at the Cotton Bowl, announced Sonny Ray Stolz as the next voice of Big Tex. But after only one season Sonny decided not to continue due to what he considered unprofessional treatment by Fair officials and the Fair brought in runner-up Bill Bragg in 2002. After the 2012 State Fair, the Fair chose not to renew Bill Bragg's contract. From 2013 through 2019, Big Tex was voiced anonymously by Bob Boykin.

The voice of the 1955 Big Tex can be heard on the recording of NBC's live Wide Wide World which includes multiple segments at the State Fair.

All content from Kiddle encyclopedia articles (including the article images and facts) can be freely used under Attribution-ShareAlike license, unless stated otherwise. Cite this article:
Big Tex Facts for Kids. Kiddle Encyclopedia.