The Blues Brothers facts for kids 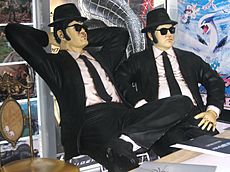 Elwood Blues was first played by Dan Aykroyd, in his radio program on Blues music. Jake Blues was played by John Belushi.

In 1980, Aykroyd and Belushi starred in the movie called The Blues Brothers, playing again the same characters from TV. Unfortunately, Belushi died only two years later. A sequel called Blues Brothers 2000 (1998) starred John Goodman as new partner to Dan Aykroyd but it was not as successful as the first movie.

Both movies were made by Universal Pictures.

The movie version of the popular characters was directed by John Landis.

Jake and Elwood are sent off by Sister Mary Stigmata of the orphanage to raise money. The money is needed to pay taxes, otherwise the orphanage will be shut down. They try to do this by getting their band back together again.

"Joliet" Jake Blues is released from jail. His brother, Elwood, picks him up in a former police car. They go to the orphanage they grew up in, since Jake promised the orphanage Mother Superior (nicknamed "The Penguin"). There they find out that the orphanage is in need of money, for taxes. Jake and Elwood are sent off to earn it, but in a legal manner. From the start they are under continuous attention of the police. But Elwood does not mind; they wreck a complete shopping mall (Dixie Square Mall in Harvey, Illinois) in a police chase. They arrive at Elwood's apartment, which is located directly next to an elevated railway. After a night's sleep the apartment is blown up by a mystery woman, right at the moment of a police raid.

The brothers have to find their former band members. They find "Bones" Malone and some others playing Latin music in a nightclub, as "Murph and the Magic Tones". Mr. Fabulous is maitre d' at a chic restaurant "Chez Paul". They convince him to join by ordering expensive bottles of champagne, and by acting like pigs, offending the other guests. They find Matt 'Guitar' Murphy and Blue Lou working in a diner. The place is run by Matt's wife, and she does not want them to join the band. Aretha Franklin, playing Matt's wife makes this clear in the song "Think!", but they go anyway. The next stop is Ray's Music Exchange, run by Ray Charles. Ray nearly shoots a boy who wants to steal a guitar (considering Ray is blind, that's amazing!). They sign an IOU for the equipment.

On the way to find the other members, they spoil a march of the Neo Nazi American Socialist White People Party. The marching members are forced to jump off a bridge into a pond to save themselves. When the brothers try to call their booking agent, the payphone is torched by the mystery woman. Fortunately they survive, and find a couple of dollars change. The Neo Nazis in the meantime find out Elwood's address (which is faked: 1060 West Addison in Chicago is Wrigley Field, home of the Chicago Cubs).

The Blues Brothers end up in a Country & Western club, Bob's Country Bunker. They steal the gig of the Good Ole Boys. When Elwood asks "What kinds of music do you usually play here?", the answer is: "Why we have both kinds-Country and Western!". They are protected from beer bottles by wire as they try their first song, but the audience go crazy. So they decide to do "Rawhide", and "Stand By Your Man", along with some other songs. At the end of the performance they owe the owner $100 (the beertab). They run from him and from the real Good Ole Boys. On the run, the Good Ole Boys' camper is wrecked by a police car in pursuit.

They blackmail Maury (their agent) into booking the Palace Hotel Ballroom with 5,000 seats. All kids in the neighborhood help in selling the tickets. Elwood and Jake end up in a gas-station that is out of gas, and the gig starts without them. Cab Calloway sings the opening song "Minnie the Moocher". Both the police and the Good Ole Boys find out where the gig is. When the brothers finally arrive, they sabotage the Good Ole Boys' car. They do two songs, Sweet Home, Chicago, and Come On. They are offered a record contract, and are paid $10,000 in advance.

They flee through a tunnel, being shot at by the mystery woman. She turns out to be Jake's ex-bride, whom he stood up at their wedding. Jake begs for their lives, and even takes off his sunglasses! They seem to fall in love all over again, but Jake leaves her behind.

In a crazy car chase the Good Ole Boys end up in a lake, hundreds of police cars are wrecked and the Neo Nazis cannot brake on an unfinished bridge. The Brothers succeed in getting to the tax office, pursued by police, special units, choppers and the army. They are arrested right after paying the taxes. Back in jail, the band plays their final song, Jailhouse Rock.

Despite the name, this sequel (second story following on from the first) came out in 1998.

A twenty-fifth anniversary edition DVD came out on August 30, 2005.

All content from Kiddle encyclopedia articles (including the article images and facts) can be freely used under Attribution-ShareAlike license, unless stated otherwise. Cite this article:
The Blues Brothers Facts for Kids. Kiddle Encyclopedia.