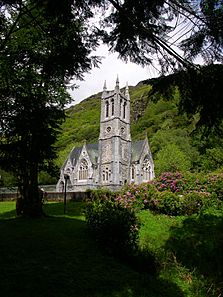 Kylemore Abbey (Irish: Mainistir na Coille Móire) is a Benedictine monastery founded in 1920 on the grounds of Kylemore Castle, in Connemara, County Galway, Ireland. The abbey was founded for Benedictine Nuns who fled Belgium in World War I. The current Mother Abbess of the Benedictine Community is Marie Hickey.

Kylemore Castle was built in 1868 as a private home for the family of Mitchell Henry, a wealthy doctor from London whose family was involved in textile manufacturing in Manchester, England. He moved to Ireland when he and his wife Margaret purchased the land around the Abbey, after having travelled there on their honeymoon in the mid 1840s. He became a politician, becoming an MP for County Galway from 1871 to 1885. The castle was designed by James Franklin Fuller, aided by Samuel Ussher Roberts. The construction of the castle began in 1867, and took the total of one hundred men and four years to complete. The castle covered approximately 40,000 square feet (3,700 m2) and had over seventy rooms with a principal wall that was two to three feet thick. The facade measures 142 feet (43 m) in width and is made of granite brought from Dalkey by sea to Letterfrack, and of limestone brought from Ballinasloe. There were 33 bedrooms, 4 bathrooms, 4 sitting rooms, a ballroom, billiard room, library, study, school room, smoking room, gun room and various offices and domestic staff residences for the butler, cook, housekeeper and other servants. Other buildings include a Gothic church and family mausoleum containing the bodies of Margaret Henry, Mitchell Henry and a great grand-nephew.

The Abbey remained in Henry's estate after he returned to England. The castle was sold to the Duke and Duchess of Manchester in 1903, who resided there for several years before being forced to sell the house and grounds because of gambling debts. In 1920, the Irish Benedictine Nuns purchased the Abbey castle and lands after they were forced to flee Ypres during World War I. The nuns, who had been based in Ypres for several hundred years, had been bombed out of their Abbey during World War I. They were rescued by men of the 8th Battalion of the Royal Munster Fusiliers, a scene that was later reproduced in the Freeman's Journal. After they left Ypres they were evacuated to England where they remained until 1920. The nuns continued to offer education to Catholic girls, opening an international boarding school and establishing a day school for girls from the locality. The school acted as the main educator for most girls from Renvyle, Letterfrack and further afield for almost a century but it was forced to close in 2010. The nuns have since been developing new education and retreat activities. Since 2015, the Abbey has entered a partnership with the University of Notre Dame. The abbey hosts academic programs for Notre Dame students, and the university renovated spaces in the abbey. 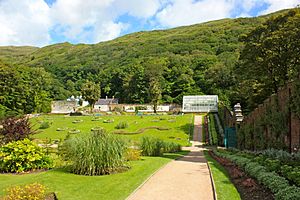 The Estate includes large walled Victorian Gardens. Since the 1970s these have been open for public tours and 'nature' walks. The Benedictine community has restored the Abbey's gardens and church with donations and local artisans in order to be a self-sustaining estate.

Kylemore Abbey was featured in the UK cooking show Two Fat Ladies, Season 3 Episode 1 "Benedictine Nuns" (1998). The host cooks Jennifer Paterson & Clarissa Dickson-Wright, cooked a dinner for the Benedictine nuns that live, work, and worship at Kylemore Abbey. At the start of the episode they accidentally arrived at the abbey farm, where one of the nuns breeds cattle. The nuns were served:

Allegedly, Clarissa sat on the strawberries that Jennifer brought to use on her shortcake dessert, squashing most of them beyond use. Jennifer accused her of it, and the pair argued in their motorcycle and sidecar while leaving the abbey, as amusedly shown during the end of the episode. They also acquired freshly caught lobsters "from a man called John", who they found in a nearby pub while his adolescent helper William cleaned the lobster pots. 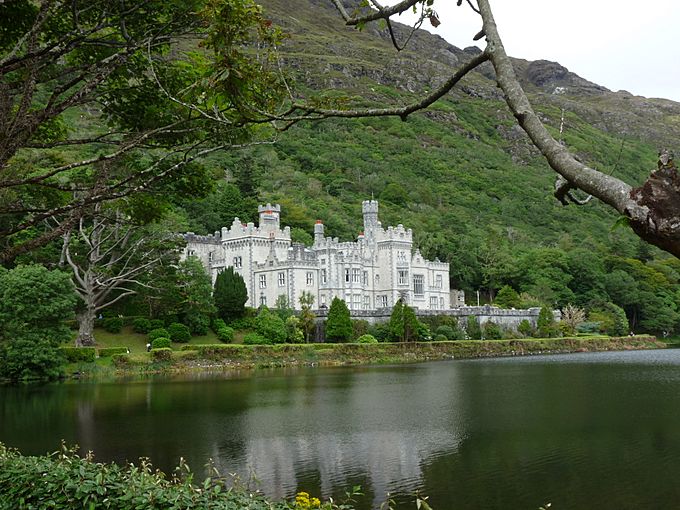 All content from Kiddle encyclopedia articles (including the article images and facts) can be freely used under Attribution-ShareAlike license, unless stated otherwise. Cite this article:
Kylemore Abbey Facts for Kids. Kiddle Encyclopedia.